It is a new beginning for the Chanku. For so long they kept their shapeshifting ability secret, but now they have assimilated into the world in ways they once never thought possible. Still there are those who want to destroy them, with dark powers of their own...

The CEO of Cheval International, Lily Cheval chooses to live alone, but a series of rape and murders leave her wary and worried for her fellow Chanku. Then she meets Sebastian Xenakis and the connection is intense and immediate. The son of a charismatic cult leader, Sebastian is a mysteriously sensual man who uses magic to shift into wolf form. He and Lily come together in a moment of supreme ecstasy, succumbing to a primal passion that leaves Lily shaken but utterly alive. Is Sebastian her lifetime mate or is her or worst enemy? 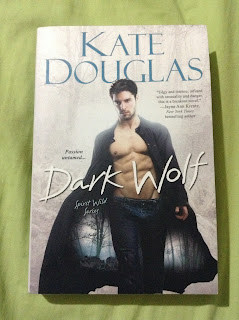 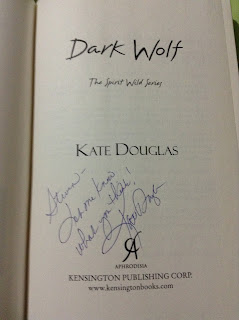 As I start off every review I want to first thank the author, Kate Douglas. In this instance she happens to be a good friend and mentor to me.

Earlier this year Kate propositioned me with being a member of her "Street Team" for her new series, "Spirit Wild." As I have reviewed a few of Kate's books in the past, I immediately jumped at the opportunity. Kate sent me a few of her Wolf Tales novels so I could get a feel for the story of the new series. I fell in love with Wolf Tales I, which ultimately made Dark Wolf more appealing as it is the story of some of the children from the original story.

There was only one thing in this book that I didn't like--the retelling of the Chanku history. It seemed a bit repetitive. It is needed for new readers of the series to provide them with adequate background story. Yet, it just felt there was too much of it being retold that could have been used for space as further story development.

The one thing that is the "elephant in the room," is the sex. It goes without being said (which sounds redundant itself), that the sex in this story is up to par with its predecessors. However, the great thing about Kate is that she doesn't make an erotic romance novel consumed by the sexual portions only. It was quite a bit into the story before things got hot and heavy. There is also an amazingly heartbreaking, yet, explicit sexual encounter towards the end that I was overwhelmed with. The way that Kate wrote it broke the masculine stereotypes of men and shed a new light to the emotions of men. The story also features a dark villain(s) that keeps you on the edge of your seat in frustration because of who it/they can be. This is probably one of the better "bad guy" scenarios I have read recently. The frustration and anticipation of the next brutal rape and murder is always at the forefront of the reader's mind, pushing you forth through the story to the conclusion. I enjoyed the novel and hope that many others do as well.

If you are a fan of Kate's and would like to further support her so her new series, Spirit Wild can continue with as much success as Wolf Tales, please post all the reviews you can on social network sites, Amazon, GoodReads, blogs, websites, tell friends and family, etc.

Favorite Quotes:
"Love endures. It grows stronger with time, and its power is never ending."

"Love is infinite. You don't need to control it. You merely accept its strength, use it for good, and it will never fail you."

"He cried and it was ugly and embarrassing because he had no control over these foreign emotions."

"Always we revel in the joy. In our love for each other, in our sense of family. It's all about the pack. Do you feel that?"