Darkness, my friend by Lisa Unger

"After giving up his post at the Hollows Police Department, Jones Cooper is at loose ends. He is having trouble facing a horrible event from his past and finding a second act. Then, on a brisk October morning, he has a visitor, Eloise Montgomery, the psychic who plays a key role in Fragile, comes to him with predictions about his future, some of them dire.

Meanwhile Michael Holt, a young man who grew up in the Hollows, has returned, lookig for answers about his mother, who went missing many years earlier. He has hired local PI Ray Muldune and psychic Eloise Montgomery to help him solve the mystery that has haunted him. What he finds might be his undoing.

Fifteen-year-old Willow Graves is exiled to The Hollows from Manhattan when six months earlier she moved to the quiet town with her novelist mother after a bitter divorce. Willow is acting out, spending time with kids that bring out the worst in her. And when things get hard, she has a tendency to run away-- a predilection that might lead her to dark place.

Set in The Hollows, the backdrop of Fragile, this is the riveting story of lives set on a collision course with devastating consequences. The result is Lisa Unger's most compelling fiction to date. 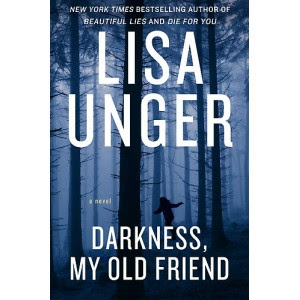 Darkness was a novel that Lisa's publicist had directly contacted me to review for. This was the second novel she requested me to review, thankfully it wasn't as tragic as the first.

I am unfamiliar with Lisa's previous novels, but it appears this is possibly a sequel to another published work. This was a combination of crime, suspense and slightly a psycho thriller. I was not truly captivated by the book until about chapter 15. The story was overwhelming up to this point, as chapter 15 arrived things began to clear up and I was able to sort the pieces and recount the prior pages into an organized one, for myself. I really got into the story of each character towards the end of the novel. It was such a gritty, dark story.

My favorite quotes:
"Surely you see that spending, your life fearing death is a death in and of itself."

""...suspense is for people with small vocabularies..."

"When did it become a badge of honor to be too busy, to have too much to do?"

"Be yourself? Do your best? How could that be true for every one? Not everyone was nice and kind, talented, pretty, intelligent. Sometimes your best was not good enough to achieve what you wanted. What happened then? Were you just stuck with yourself, your life just whatever sad product of your "best" effort?
Posted by Steven's Cybrary at 5:10 PM No comments: