What would happen if your favorite Star Wars characters, creatures, and vehicles that never got to duel were to go head-to-head? Thirty stunning battles include Darth Vader Vs. Yoda, the Millenium Falcon Vs. the Sith Infiltrator, and Ewok Vs. Jawa! Decide who you think would win these never-before-seen face-offs. Then check out what the experts have to say about these incredible showdowns! 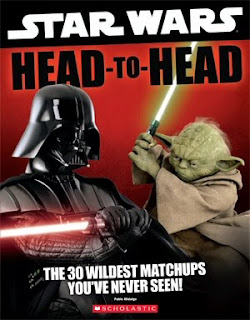 This book was a hard one to decide on how to approach a review. The easiest option was to simply say,"Yes it was good." Or, "No it was bad!" Realistically that wasn't an option. So I approached this review as if it were a real championship. I reviewed each battle and simply compiled it into a list of my thoughts and whether I agreed or disagreed. Everyone knows I am a die-hard Star Wars fanatic. Yes, I even have a Star Wars shrine. As much of a die-hard fan as I am, some of these characters I don't remember. So here it goes...

Yoda Vs. Darth Vader:
I am an extreme fan of both, but this is the epitome of Star Wars conflicts. We all want to know who would win. I personally see them both battling til their deaths. Only (George) Lucas can deem the true winner of this fight. DISAGREE!

Obi-Wan Kenobi Vs. Boba Fett:
The winner is obviously Obi-Wan. It would be too off the wall for Boba who is still grieving over his father's death, as a grown man, to so easily subdue Obi-Wan. AGREE!

Luke Vs. Anakin Skywalker:
Yet another obvious win. We've all seen the movies. Although Anakin's self-sacrifice to save his loved ones, only becomes his ultimate downfall. Either way you look at it, Anakin or Darth Vader, the end is the same. Luke prevails over his father. AGREE!

General Grievous Vs. Palpatine:
This is a tough match-up. The skill of Grievous meets the power & knowledge of Palpatine. I see Palpatine winning. However, they both have a human heart that can be destroyed. AGREE!

Speeder Bike Vs. Wookie Gnasp:
Although I prefer the Speeder Bike for appeal factor I think the Gnasp would destroy a Speeder lightning fast! The movies feature so many downfalls of the Speeder than they do the Gnasp. DISAGREE!

Jabba's Rancor Vs. Nexu:
Based on the stats these two are in a close tie. I think Nexu would kill Rancor in a flash. DISAGREE!

AT-Atwalker Vs. Clone Turbo Tank:
Not sure how two vehicles battle, but I would think the Clone Tank would win. The Walker has too many weak spots, most notably the tall, long legs. This was proven in the movies battle scenes. DISAGREE!

Darth Maul Vs. Kit Fisto:
Aside from Vader, Maul is my favorite Darth Sith. I wished that he could battle Kit Fisto, but in the end... DISAGREE!

Jawa Vs. Ewok:
One of my top favorite creatures in the Star Wars saga is the Ewok. The Jawa are a weak civilization. Without weaponry they're useless. The Ewok without a doubt would win! AGREE!

Bantha Vs. Reek:
The Bantha should win. They're more intelligent. In the end, I guess it would be a toss up based on endurance?! DISAGREE!

Tie-Fighter Vs. Naboo N-1 Starfighter:
Although the Starfighter by appeal is cool, it is a weak ship. The Tie-fighter is an amazing piece of weaponry. AGREE!

X-wing Vs. Grievous Starfighter:
The X-wing is a way better fighter and has better flight equipment. It appears that the aircrafts from episodes 4-6 are better equipped. Which should be obvious since the engineering is more advanced. AGREE!

Acklay Vs. Boga:
Boga is cool. She is fast, viscious, and can climb. Acklay is more hesitant. AGREE!

AR-170 Vs. B-Wing:
Based on control, the Hull and firepower could easily take out it's opponent. AGREE!

Chewbacca Vs. Wampa:
Chewie is a fierce competitor, but this would have been a great showdown. AGREE!

Bossk Vs. Droideka:
Droideka should win because of their defector shields Vs. Bossk's regrowth of limbs. DISAGREE!

Snowspeeder Vs. Attack Gunship:
The Snowspeeder is just badass in so many ways! AGREED!

Animorphs: The Invasion by K.A. Applegate

We can't tell you who we are. Or where we live. It's too risky, and we've got to be careful. But everyone is in danger. Yeah. Even you.

Sometimes weird things happen to people. Ask Jake. He could tell you about the night he and his friends saw a strange light in the sky that seemed to be heading right for them. That was the night five normal kids learned that humanity is under a silent attack-- and were given the power to fight back.

Now Jake. Rachel, Cassie, Tobias & Marco can transform into some of the most dangerous creatures on Earth. And they must use that power to outsmart and evil greater than anything the world has ever seen. ... 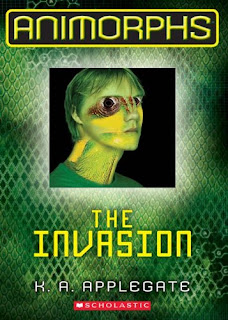 When Mandee from Scholastic sent me the catalog for 2011, I was shocked to see some of my all time favorite books on the list-- Animorphs. These wonderful children's books have been re-released with awesome new 3d images of the characters morphing into animals. So cool!! I immediately contacted her back with an excitement to return to the imaginative world of K.A. Applegate's morphing superheroes.

Even as an adult, reading this novel was a certain page turner. The chapters read so quickly and so easily that you CAN'T put it down! The thing that I enjoyed, and kids will enjoy, is the vivid description the author gives when the children morph into their animals. The battle scene with Visser Three was of epic proportions. This will captivate the young readers to read the next novel and stay interested in the story. The end of the story left hope for the Animorphs, and human kind, for a positive saga. These novels do more than just provide entertainment. There are so many life lessons that are expressed through the entirety of the story. A few of these lessons: determination, diversity, bullying, education.
Posted by Steven's Cybrary at 9:35 PM 1 comment:

Taken by the Others by Jess Haines

Once, New York P.I. Shiarra Waynest's most pressing problem was keeping her agency afloat. Now, she's dealing with two dangerous, seductive vampires who have been enemies for centuries. The only thing Max Carlyle and Alec Royce agree on is that they both want Shia-- for very different reasons.

Max is determined to destroy Shia for killing his progeny, while Royce's interest is a lot more personal. That's not sitting well with Shia's werewolf boyfriend, Chaz. As the feud between Max and Royce gets even more deadly, a powerful vampire-hunting faction is urging Shia to join their side. Shia has always believed vamps were the bad guys, but she's discovering unexpected shades of grey that are about to redefine her friends, her loyalties-- and even her desires. 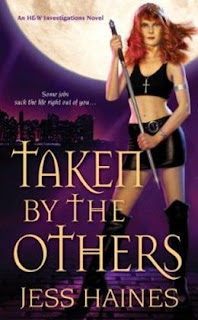 Where does this review begin? Well I suppose first I should thank Jess & her super assistant Binah, for sending me the book to review. After reading Hunted by the Others I knew I wanted to continue following Shia's story.

Taken had a very deepened foreboding undertone. Jess writes wish such a sassy humor that one can't afford to pass up her books. This is book two in the H&W Investigations series. I was happy to see a good portion of my favorite characters retrun, in addition to some new ones being introduced. However Chaz seemed like a distant character, for about a 1/3 of the novel, in this book more than he was in the first. Chaz & Shia's relationship is faulty. It appears that their relationship has become as much of a background as Chaz's character was as well. One begins hopeful for a new relationship between Shia & Alec. I think John's character as a traitor was a predictability that I saw from the beginning of the novel. I will be beginning Decieved by the Others in the New Year. I anticipate the release of books 4-6 in the H&W Investigations series.

Favorite quotes:
"It wasn't fair (for a vampire) to be rich, good looking, and smart, too. Two out of three wasn't bad, three for three was just plain unfair.

"...even though the visible scars fade, some emotional ones take a lot longer to heal."
Posted by Steven's Cybrary at 9:16 PM No comments: