What inspired you to become a writer?
Hard to say, since I've wanted to be a writer for as long as I can remember. I don't remember deciding - it feels like I always knew.

How long have you been writing for?
I have a copy of my first short story, which I wrote when I was in first grade (it was told from the point of view of an ice cream cone). I began writing what I thought of as my first "book" when I was in third grade. And when I was 15, I finished the first book that I thought was publishable (I was wrong).

As an author who is your favorite to read from?
I can't possibly pick a favorite! But of the books I read this past month (yes, that's about as far as I can take it) my favorites were WHISPER by Phoebe Kitanidis and MOCKINGJAY by Suzanne Collins.

What is your favorite genre?
Fantasy. (See, *that* one was easy.)

What do you like to do in your spare time? Writing isn't an answer! :)
Is "I don't have spare time" an answer? ;) Reading, obviously; but I also really love biking, and I don't get to do it as often as I like. I live near some great biking/walking trails in Boston, one of which takes me along a creek, past two lakes, and to the Arboretum. With occasional scatterings of wild geese along the way. 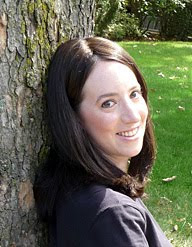 Have you ever collaborated with another author? Or plan too?
My cousin and I used to try and write joint books when we were in high school. None of them ever came to anything. However, we once wrote down 100 "first lines" for stories, and tried to each write a story starting from the same first line. The story I wrote for that exercise ended up being the first story I got professionally published. (It was called Temple of Stone, and you can read it for free on my website!)

Any words of wisdom for your fans and readers?
Don't give up on your dream, but at the same time be flexible about it. For writers specifically, this translates into not letting rejection get you down - but also being ready to move on to another manuscript if the first one isn't going anywhere.