1) You have quite a collection of works published. Which one was the hardest to get published? The easiest?
Nothing's easy to get published. I guess I'm pretty lucky now in that most of what I write is to commission, but I still get rejections, and am still delighted whenever I receive an acceptance for something.

2) What was is like for you when you got your first book to film deal?
First time I had something optioned I thought, 'This is it, buy a house and a car and never have to worry again!' I've now gone through about fifteen options, and have quickly learnt that it's just the first step in a long process. There's always a chance that something optioned will make it to the screen, but the chance is usually small, and there are any number of obstacles in the way.

There are several film projects that are now looking more and more likely to be made, but I prefer not to say too much until they hit the screen!

3) You have an upcoming series of novels with Christopher Golden, The Secret Journeys of Jack London. Can you tell us more on them?
We're retelling Jack London's most famous works with him as the main character, and with the supernatural as a big part of the story ... the set-up is that he lived through these tales, but they were so challenging and traumatising that he could not face writing them as biography. So he changed details, and wrote them as fiction, and we're telling his Secret Journeys. We're just about to deliver Book 2, and we're having a huge amount of fun. Fox have acquired the movie rights, and Chris and I have been hired to write the screenplay.

4) As a big fan of Twilight, that I am, I found the picture on your site hysterical. Who knew bestiality and necrophilia could be so popular?
Don't knock it til you've tried it.

5) As you write, do you work on one piece at a time or multiple novels?
Usually I'm working on a novel of my own, a collaboration with Chris Golden, and proposals for future novels or screenplays. I've always got several projects at various stages, and - depending on deadlines - I'm able to drop onto a screenplay if I'm having a bit of trouble with a novel, or vice versa. I like being busy. 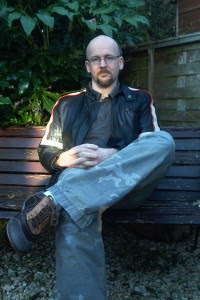 7) Can you remember your first horror movie?
It was a TV show actually, Beasts by Nigel Kneale. The episode was called Baby, and was utterly terrifying.

8) Are you reading any novels currently?
The Ocean Dark by Jack Rogan. A great supernatural thriller debut ... he's going to be huge.

9) What do you think makes so many people interested in horror? Sense of thrill? Sheer curiousity?
Fascination with the dark side, death, bad things. Escapism. A good story.

10) What three things do you need while you write?
Solitude, music, coffee.
Posted by Steven's Cybrary at 12:03 AM