"Since time began, the Earth has served as a balance between the world of darkness that is the Abyss, and the paradise known as Eden. Now the battle between good and evil has reached a tipping point, and survival depends on one fallen demon-and the woman he can't resist... 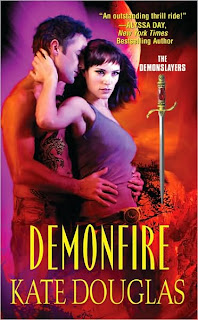 I contacted author Kate Douglas last month in hopes of getting an ARC of "Demonfire." I didn't know it was already out in stores. She was so kind and sent me a final copy of the novel, a postcard of "Demonfire" and two of her "Wolf Tales" novel bookmarks. Thank you again Kate for all of the items. Kate and I began emailing back and forth, and then she asked to add me on Facebook. I was a bit hesitant due to the fact of my...choice of words and topics I discuss on my personal page. Thankfully Kate isn't too worried over such trivial things.

This book was another I knew I would love because of the cover art. Mrs. Douglas's creative imagination with giving life to inanimate objects was phenomenal. Who knew garden gnomes and other garden sculptures could be so frightening! She also created a character, Dax, so strong, determined and powerful- yet possessed human weaknesses. Another character, Eddy, who can also be strong and powerful in her own human right. These two main characters were a beautiful compliment to each other's failures. Dax and Eddy were also accompanied by a few other important characters: Alton (a Lemurian prince), Ed (Eddy's father), Willow (a will-o-the-wisp) and lastly Bumper (a tragic mix of Pitbull & Poodle). All of these characters fight valiantly to save not just their city from the foreign invasion of demons from Abyss, but also the world. Among the struggles of saving humanity they all bond and become a family of sorts. 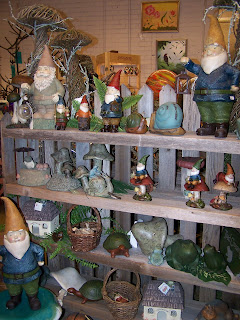 (I took this at the Biltmore Estate Garden Shop just for Kate. "Demonfire" fans will know why!)
After reading about half of this novel I realized that I am developing a passion for the "Paranormal Romance" genre- even if it is heterosexually oriented. With all the blood/violence/supernaturalism you forget it's a love story as well. Kate politely reminds you of that throughout the story with Dax and Eddy's developing relationship. Even Ginny, Eddy's bff, begins something with Alton. Although you don't know what it is, I have a sense in "Hellfire: The Demonslayers" you will find out what it is. The last five chapters I was cautious in reading, I didn't want the story to end. Kate surely has developed a wonderful story mixed with all the good stuff a book needs to survive. I anticipate the release of "Hellfire" and hope it spawns many, many wonderful sequels.
Posted by Steven's Cybrary at 7:43 PM