The Feathered Serpent by Junius Podrug

The fabeled Feathered Serpent, harbinger of the apocalypse, has begun his relentless ascent out of the bowels of the earth.
Beautiful astrobiologist and archaeologist Caden Montez is on his trail. Caden is in Teotihuacan, the ancient ruin she believes is the best site on earth to find evidence of visitation by aliens in ancient times. While exploring the "City of the Gods"- a place so eerie it terrified even the most ferocious Aztecs-she discovers that the Serpent has broken free of its two-thousand-year entombment.
Ancient Mayan priests prophesied that when the Feathered Serpent returned, he would open the gates to the End Time.
The Mayans's Fourth Horseman of the Apocalypse is on the move, and humanity's survival hangs in the balance. Caden must stop the beast and is helped by someone who had once battled it: Tah-Heen, a champion in the gladitorial ball courts where the "game of life and death" was played- and the loser sacrificed- two-thousand-years ago.
A stranger in a strange land when a secret program brings him across the gulf of time, Tah-Heen teams with Caden to battle the diabolical foe that destroyed an entire civilization-and has come back with a vengeance.
History, mystery, cutting-edge science, and suspense unfold as the scientist and the warrior battle a preternatural beast that is intent upon bringing about the 2012 apocalyptic vision. 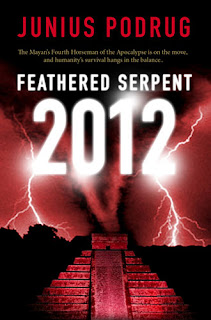 This was another ARC request that I had asked for. Junius so kindly sent it to me and autographed it as well. As I began to read it, the first chapter made me recall my childhood ambition of becoming an archaeologist "when I grow up." The story makes me think of X-Files meets the History Channel. The chapter/book set up makes it an easy and enjoyable read for anyone.

There was a portion where the author actually noted a reference to his previous novel, which I think was a great idea for any one unfamiliar with any of his novels. It features a whole load of historically educational flashbacks. I liked the fact that Tah-Heen had a background story (which was a good portion of the novel). Tah-Heen's character is written with such a great combination of humor and naive-ity. The combining of Tah-Heen's story with present day meshed quite well without causing the reader any forms of confusion.

Not only was the story educational, but it also was ecologically and conservationally, (If that's even a word), thought provoking. The Feathered Serpent is another novel I would recommend to any historical or historical fiction fans out there. As I read this book everyone kept claiming, "I loved the movie!" I do believe that this is NOT the novel based off the Nicholas Cage movie. Correct me if I'm wrong, I'm just not wanting any of my readers to assume it is, read the novel and be upset for the confusion.

xoxo
Posted by Steven's Cybrary at 8:59 AM