A MESMERIZING TALE THAT WEAVES HISTORY AND MYTHOLOGY AROUND A COMMUNITY OF CHINESE IMMIGRANTS AND THE GHOSTS THAT HAUNT THEM.

Locke, California 1928. Three bedraggled Chinese women appear out of the mist in a small Chinese farming town on the Sacramento River. Two are unknown to its residents, while the third is the long-lost wife of Richard Fong, the handsome manager of the local gambling parlor. Left behind in China many years earlier, her unexpected arrival throws his already complicated life into upheaval. As the lives of the townspeople become inextricably intertwined with the newly arrived women, a premonition foretells a deep unhappiness for all involved. And when a flood threatens the village, the frightening power of these mysterious women is finally revealed. 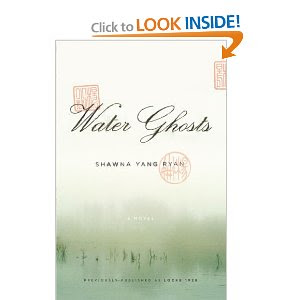 This was another ARC I had requested. Shawna has allowed me the opportunity to review and interview her work. Originally I thought this was a debut author novel. In actuality it is a re-release under a new title. Previously the book was published in 2007 as Locke 1928. The cover image above is of the original publication, not of the one I was sent.

The lack of quotations during character conversations made this a hard novel to read for me. I was driven to read this because of the Asian culture that I am so intrigued by. The novel doesn't fall short on rich, cultural history. There were so many characters and stories intertwined amongst flash-backs. I think this was another thing that made it a difficult read for me.

There was one particular scene between the characters Alfred & Chloe. As I read it, it was so close to being like the shopping scene with Julia Roberts in Pretty Woman. I don't know if that was an inspiration or simply just a coincidence.

Upon completion of Water Ghosts I am still confused if the women on the boat were ghosts of a mental or physical apparitions? While I am not putting down the novel, I think that if the book was written in a different aspect I could have enjoyed it more to its capacity I am sure it was meant to be. Thanks again to Shawna for allowing me to review this story and interview her as well.
xoxo
Posted by Steven's Cybrary at 4:11 AM