The Dead Have Risen!

We were once a race seven billion strong. But today, our world has become a wasteland overrun by the living dead. Rivers of zombies flood the streets. They never rest. They never relent. Their hunger for the living is insatiable. And with every careless mistake we make, their numbers swell.

Scenes from the end of the world...

Michelle McCrary and Joe McKinney have brought together twenty original tales of the end of our world from horror's brightest talents. Within these pages you'll find a madman longing for the good old days of Hometown America, a company that deals in the dead, a radio DJ who holds the living together with her voice, and a soldier haunted by the living and the dead alike. This is the end of the world as you've never seen it before.
Featuring stories from Lisa Mannetti, Lee Thomas, Bev Vincent, Harry Shannon, David Dunwoody, Nate Southard, Boyd E. Harris, and a host of others, Dead Set will take you on a guided tour through the ruins. The zombie story has finally come of age. 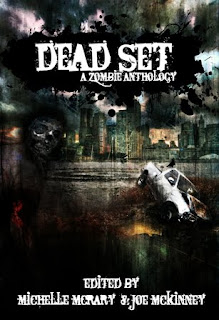 This was a first for me. I haven't done an anthology review yet. This is also the start of August's Zombie vs Vampire month.

Resurgam by Lisa Manneti:
I would have liked the story to focus on Auden & Sheri or Cruncher & Sykes or just have the past & present come together more fluidly. Also, you have no clue what happened to Sheri?

Jailbreak by Steven W Booth & Harry Shannon
This was a fun read. It was written iin a John Carpenter style.

Recess by Rob Fox
A new twist on zombies. Occasionally you see zombie children featured in film and novels. But never soley focused on them like this story.

Biting The Hand That Feeds You by Carrie Voorhis
Hilarious. Morbid. Sad.

Judgement by Stephanie Kincaid
Almost seemed lik you weren't going to read anything about any undead. The ending was very abrupt.

Hatfield the Usurper by Matthew Louis
Read like a movie. Favorite quote: "He could almost smell the waft off the pages of a newly opened paperbac, almost see the typeface racked up in wonderful rows and clumped in intoxicating paragraphs..."

Ruminations From Tri-Omega House by David Dunwoody
Good story, I likedthe Richard Matheson reference. But it wasn't explained- did Prof. Rand bite Larry before the story began? When Rand was chasing Larry it didn't seem like he got to him?

Zombies On A Plane by Bev Vincent
Not much to say on this one. I didn't care for it one way or another. Like a story without a plot to it.

Category Five by Richard Jeter
Not a fan of this one either. The zombie interaction was too minimalistic for even a short story.

Survivors by Joe McKinney
Written with some action-packed intensity as Dead City (previous review). Balls to the wall fun!

In the Middle of Poplar Street by Nate Southard
Fun story but I wished the ending would have been more lengthy. Did Ginny kill the zombie? Or did the zombie kill her? Favorite quote: "...scared people get angry because they don't like being afraid, and they think it's somebody else's fault that they were so scared in the first place."

Seminar Z by J.L. Comeau
Interesting story. Unsure whether I liked or disliked it. Another story that the ending was just...

Only Nibble by Bob Nailor
I was hesitant to like this one. The last sentence was my deciding factor, What a great story.

Inside Where It's Warm by Lee Thomas
Generic and typical zombie story, with a possible half zombie/half human. I'm not quite sure but that was my take it.

Survivor Talk by Mitchel Whitington
Another great story. One that didn't have a predictable ending Background story. Zombie action that didn't jeopardize the entirety of the story.

Good Neighbor Sam by Mark Onspaugh
Originally started out interesting but ...zzzzzzzzzzzz!!! I had to force myself to reread it for the sake of this review to get a more accurate opinion. The second time around it reminded me of House of Wax but with zombies/ It was based in Ohio with the mention of Lancaster, my hometown.

That Which Survives- Morgan Ashe
This was an ok story. A medical twist.

Overall I really enjoyed this anthology. Some of the stories made me wonder why I don't read more zombie fiction, while others confirmed why I do not. Those stories I think should have been omitted for the sake of the novel's entirety and substituted for some more worthy ones.

Thanks again to Joe McKinney for sending me this gift.
xoxo
Posted by Steven's Cybrary at 6:57 AM