The Vampire And The Virgin by Kerrelyn Sparks

FBI psychologist Olivia Sotiris is looking for a cool ocean breeze, sand between her toes, and a break from her crazy, chaotic, and sometimes all-too dangerous life Robby MacKay is on an enforced vacation, since all he can think about is revenge against the Malcontents who had tortured him. But when Robby meets Olivia, all he can think about is the beauty with the tempting smile...and their nights together and anything but cool... 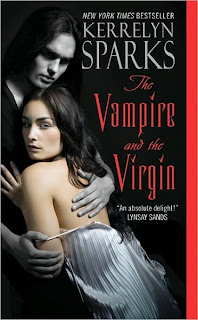 This was another ARC I had requested. Kerrelyn sent me the book autographed and included a bookcard and a bookmark as well. This is the first of the vampire reviews for the Zombie vs Vampire reviews for August.

The first thing I liked about this novel was the fact of the bat graphics featured at the beginning of each chapter. The budding romance between Olivia and Robby urges the reader to run a red light! The hilarious sexual innuendos are just amazing. The author's sense of creativity with vampire food and beverage items: Bleer, Blisky Chocolood, Bubbly Blood, and Bleer Lite.

I did find it hard at first to decipher Robby's words. After a while tho, I did figure out what he was saying and just basically began reading it as english. I also enjoyed the featuring of Carlos being a were-jaguar and other paranormal characters.

I am unsure if this is the last book in a series, of if it's just the end to a series with unrelated characters . Either way the dilema with Casmir was never resolved. Unless the story evolves into a new one, the Casmir dilema should have been extended to a solution positively or negatively.

This was another book that as the pages came to an end that I was hesitant on the ending. Luckily it wasn't a bad ending. I really enjoyed the story. I can definitely see myself pursuing my book readings from Ms. Sparks.

Favorite quotes:
"Not all lies are bad. It is the intent to decieve that is bad."

"The language of love doesn't have words.

xoxo
Posted by Steven's Cybrary at 8:00 AM