Hearts At Stake by Alyxandra Harvey 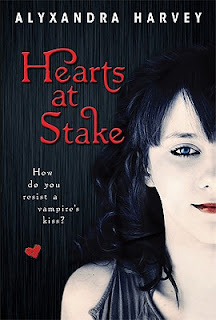 This was an Arc that was unavailable when I had made my request. Shortly after I was offered an oppotunity that had expired before I even had a chance to reply. That said, it was clear to me the potential of this new series was going to be way more popular than expected. Thankfully Kate Lied, publicity assistant with Bloomsbury publishing, offered to send me Hearts At Stake (#1) and Blood Feud (#2) in the Drake Chronicles due to the inconvenience.

This was another of my featured novels in August's "Zombies Vs Vampires" theme. Not only was the book so great, but it was extremely fast paced and I didn't want to put it down. Although the story is written based on the Drake family, and this one mostly on Solange Drake, I was more drawn to Lucy & Nicholas's characters. Lucy especially overshadows Solange and it made it feel like the characters should have been flip flopped? Alyxandra Harvey has created such a detailed family lineage with the Drake family vampires that it makes it easy to follow the story without any forms of confusion.

I actually felt that while reading it there was a sense of modern-day poetry with a retro feel. I think with such creativity in the way it is written that it allows the audience of readers to vary in age ranges without being too kitschy and even too kiddy. The ending was of the sort that compels the reader of a hunger to continue such a fun and thrilling journey with the Drake family vampires...and even my girl Lucy!
xoxo
Posted by Steven's Cybrary at 8:33 PM