ON THE DAY SHE WAS ABDUCTED, Annie O'Sullivan, a thirty-two-year-old realtor, had three goals-sell a house, forget about a recent argument with her mother, and be on time for dinner with her ever-patient boyfriend. The open house is slow, but when her last visitor pulls up in a van she's about to leave, Annie thinks it just might be her lucky day after all.

But nothing could be further from the truth.

Through sessions with her psychiatrist, Annie retells the terrifying story of the year she spent captive in a remote mountain cabin. Interwoven is a second narrative recounting the aftermath of her escape and her struggle to piece her life back together. 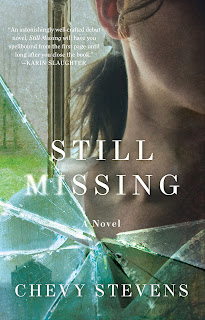 This is another novel that is way off from my typical reads, but it looked interesting and I am thankful that Chevy allowed me to give it a shot. I originally contacted Chevy and she had her publicist send me the ARC.

This story is written based on a nightmare the author had. I can't even begin to fathom the feelings that she had, but I think that in writing this novel it had to put her at ease in some sort or another. As I began reading the story the song "Jesus Take The Wheel" by Carrie Underwood came to mind. The main character Annie has so many things that she is forced to overcome. Although Annie is fictional, her emotions and feelings portrayed throughout the story are so vivid that you're not just reading them, it's like you're feeling them yourself.

There's also a sickening reality to David's character. There are so many fucked up souls out in the real world which makes David so easily terrifying for any reader. The story is written in almost two combined novels in one. The sessions with Annie and her psychiatrist and the time after the fact ofher brutal and disturbing kidnapping. As you read, the novel weaves both points of view into one. When the pieces finally come together it was a shock at why and how Annie's events all came into play.

There were two scenes that I had taken note of. The first is the part when Annie and Luke hug. This is the first intimate moment after her tragic events. For me this scene had such an overwhelming surge of sadness. The second scene was when Gary & Annie have sex. I was particularly confused on this. I am not a victim of rape, a rapist, nor a psychiatrist. So I find it hard to believe fictional or otherwise that a rape victim would EVER want to have sex. The control thing made sense to me. The sex...not-so-much?!

If I were asked for a brief review (which we all know I don't do-often!) I would have to say this is one ROYALLY FUCKED UP novel worthy of a wonderful Lifetime movie adaptation! I thoroughly enjoyed it and it is written with such a profound no-holds-bar style of penmanship.

Favorite quotes:
"You can be as happy as you've ever been in your life, and shit is still going to happen. But it doesn't just happen. It knocks you sideways and crushes you into the ground, because you were stupid enough to believe in sunshine and roses."

"...no one is a lost cause, but I think that's bullshit. I think people can be so crushed, so broken, that they'll never be anything more than a fragment of a whole person."
xoxo