Down Among The Dead Men by Robert Gregory Browne

IN THE HOUSE OF DEATH

The newspapers called it Casa de la Muerta, a grisly house of horrors in the Mexican desert where five Catholic nuns were brutally murdered. Freelance journalist Nick Vargas knows it's a terrific subject for a true crime book-and a chance to revitalize his ruined career. But when he arrives at the scene, he learns there may have been a sixth victim: an American woman whose body has disappeared. Now Nick is dead set on finding her...

IN THE SHADOW OF EVIL

L.A. prosecutor Beth Crawford thought it would be fun to join her sister on a cruise to Baja Norte. But when she meets a pair of seductive strangers onboard-Beth follows her suspicions into a sinister world of crime, corruption, and dark superstition. Now, with the help of reporter Nick Vargas, Beth must enter the heart of evil itself, where all shall be revealed...on the Day of the Dead. 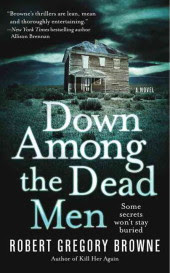 This is another ARC that I had requested last year. This is definitely not the typical genre of books I enjoy. However something about this story captivated my attention. The prologue was one that held my attention and catapulted me to continue further reading. This novel's chapters were one of such easy reading that they were actually much shorter than most I've ever. It was an adrenaline ride between Vargas' story & Beth's. I was intrigued on how they would eventually be correlated.

Beth's side of the story is like a tug-of-war with Jen, while Vargas' is more...gripping. Part 2 was significantly more dramatic with a turn of events that had pieces of the puzzle to the story that came together confirming my suspicion from the beginning. The last 1/4 of the book made me want to skip ahead. The intensity of the story became considerably more...intriguing...action packed...clear as the puzzle pieces are assembled from part 2.

I admit at being shocked at the ending. I wasn't sure what to expect or even what my own expectations were. But if you want to read a fairy tale, this isn't it!

As I said above, this isn't my typical genre of choice but the story resonated so well with me that I am happy I was given the opportunity to read it. I actually enjoyed it so much that I am open to reading other works from this author.
Posted by Steven's Cybrary at 1:50 PM