The Short Second Life of Bree Tanner by Stephanie Meyer

ALL BREE KNOWS IS THAT LIVING WITH HER
fellow newborns has few certainties and even
fewer rules: watch your back, don't draw
attention to yourself, and above all, make it
home by sunrise or die. What she doesn't know:
her time as an immortal is quickly running out.

THEN BREE FINDS AN UNEXPECTED FRIEND
in Diego, a newborn just as curious as Bree
about their new creator, whom they
know only as her. As they come to realize that
the newborns are pawns in a game larger than
anything they could have imagined, Bree and
Diego must choose sides and decide whom to
trust. But when everything you know about
vampires is based on a lie, how do you find
the truth?

IN ANOTHER IRRESISTIBLE COMBINATION
of danger, mystery, and romance, Stephenie
Meyer tells the devastating story of the newborn
army as they prepare to close in on Bella Swan
and the Cullens, following their encounter to
its unforgettable conclusion. 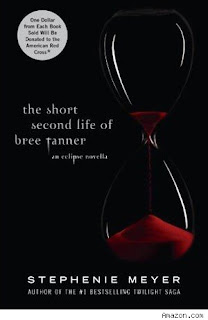 Ever since this book was released I would go to the store in attempts of buying it. Money was never the issue. I was more concerned with the effects of my opinions on it changing how I felt about the Twilight Saga. This past Christmas the choice was made for me. My aunt had bought the book for me as a present. That day I read the entire story.

I was happy to return to the Twilight story but focusing on a different character, a different story and even a different perspective. I really enjoyed Stephanies enlightening foreword on her reasoning to include Bree's story in the saga.

During the Eclipse novel and more notably for those who don't bother reading books, the movie, Bree was portrayed as barely even a character to remember. She was also displayed as a weak and timid newly turned vampire. I believe if anyone were to read this book you would quickly change your mind.

I thought it was interesting how the book is layed out with no chapters. This definitely made it more clear how Meyer's didn't want Bree's life thought of as pro-longed but brief, and short like the title states.

Diego, another vampire character, who I don't remember from the books or movies is an addition to the cast of top characters, in my opinion. I think that Fred has the potential for another spin-off story featuring the Volturi.

Overall this added story was written in a new way that the previous Twilight saga was. I also find it comforting to know that she included certain parts from the previous four books to preserve pertinent scenes but specifically planted in Bree's story from her perspective. It's amazing how perspective can play a significant role on how a story evolves or can even change.
Posted by Steven's Cybrary at 3:17 PM