The Mage In Black by Jaye Wells

Sabina Kane doesn't have the best track record when it comes to family. After all, her own grandmother, leader of the vampire race, wants her dead. But when Sabina meets her mage relatives in New York, at least they put the fun in dysfunctional. Though, bizarrely, everyone seems to think she's some kind of Chosen who'll unite the dark races. Sabina doesn't care who chose her, she's not into destiny.

But the mages aren't Sabina's only problem. In New York's Black Light District, she has run-ins with fighting demons, hostile werewolves and an opportunistic flame. Sabina thought she'd take a bite out of the Big Apple, but it looks like it wants to bite back. 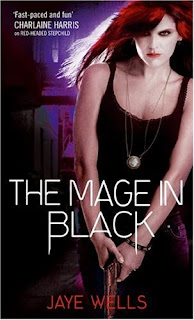 This is the second book in the Sabina Kane series that Jaye had sent me upon request. Immediately I could tell that Jaye's sense of humor still dominated the story. I was frustrated that there was no talk of Lavinia's predicament from the ending of book one to her locality in book two. There was also talk of Lavinia...but she never appeared. I expected some conflict or even a resolution with her and Sabina in some way or another.

The layout of chapters in this book were a bit longer than book one's, but still filled with excitement, yet not overly lengthy to a feel boredom. (Basically still a sense of easy reading and flowing.)It did feel like at one part the story became a mix of Fight Club meets Pokemon of Demons. I did think eventually this Demon Fight Club took away from Sabina's actual story. I also felt that Damara's character was predictable from her entrance in the story.

Again, I did find a handful or more of errors as I did in book one. I don't blame the author. I just think that the publishing department needs to seriously consider their employees who do these things. If I were an author, which eventually I hope will happen one day, I would be embarrassed to be told about many mistakes in a final copy of my work.
Posted by Steven's Cybrary at 12:37 PM