They say you can see things here, at the end of the world. Faces in the clouds and waves and leaves. Branches becoming arms and then branches again.

But there it was a flash of white.
Margrethe blinked repeatedly, and the sea air seemed to cut through her.
She wiped tears from her eyes and cheeks and leaned into the wind. The sea
seemed to shift from foam to water, from dark to light, swirling. In the distance,
rocks jutted. It would be easy to mistake one for the monstrous fin of a great fish, the prow of a ship sinking down.
And then: a curving, gleaming tail flaring out of the water. A moment
later, another flash and a pale face emerging, disappearing as quickly as it had
appeared. A woman's face. The tail of a fish stretching out behind her. Silvery,
as if it were made of gems...
Mermaid. The name came to Margrethe automatically, from the stories that had rooted themselves in her mind, the ancient tales she had read by firelight as the rest of the castle had slept.
She no longer felt the wind or the cold as she stood transfixed, watching
the mermaid move through the water. Margrethe had not known such things
could really exist, but the moment she saw the mermaid, it was as if the world
had always contained this kind of wonder...
As the mermaid approached the shore, Margrethe saw that she was carrying
something. A man. 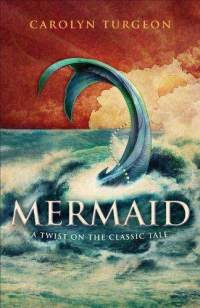 So this just happens to be the third review I have done for Carolyn. I knew in 2010 this book was in route to being published. As with the two previous novels, I most certainly wanted to read it. Thankfully Carolyn offered to send it to me before I had to beg for it. LOL!

Carolyn Turgeon is like Calgon...take me away! From page one until page 240 her words develop such vivid imagery of the scene she writes about. In this novel it features the classic tale of "The Little Mermaid" by Hans Christian Andersen, only with the author's up-to-date adaptation. There are two princesses: Margrethe the human, and Lenia/Astrid the mermaid princess. The story is told from both of their perspectives alternating by each princess per chapter, essentially this is almost like two books in one.

There was a section that was purely poetic to me, some may think in a morbid way. The portion I am speaking of talks about a comparison of human and mermaid death; with humans we rot and with mermaids they turn to foam. This was so beautifully written and phrased that Carolyn can even make death sound pleasant.

Unlike the Disney, way too cheer-y version, this take is definitely nowhere near that. In this version the sea witch is not some psycho lunatic mad woman under the sea. She actually has a very sad back story. I think this is one of the huge differences that made a significant impact upon this story. While on this topic, I felt that Lenia's character gave a more realistic offering for the spell of her transformation from mermaid to human. It was drastically more gothic than that of any other mermaid tale, yet it provided

Mermaid is a fairy tale book of melodic metaphors. When Lenia/Astrid saw Christopher again the lack of her ability to speak causes such a depth of sadness for the reader. Before I began reading Ch. 16 I went to check my email on Yahoo. As soon as I logged on I quickly seen an article about a mermaid book becoming a movie. I knew just what book this was for! I couldn't help but get excited for both the book and Carolyn.

During Chapter 16 I began to get so overwhelmed with frustration with the play of events. I expected one thing but got another. This was further expanded into Chapter 23. During that chapter there was a whirlpool of emotional events with the three main characters: Margrethe, Lenia/Astrid and Christopher. Upon reaching the ending of the novel I was even more frustrated with the ending. Society has turned fairy tales into splendid, glorious tales of happiness. Although I wasn't happy with the ended, the story ended just as it should have. It is a welcoming feeling to know that Carolyn has brought back a true and authentic adaptation of such a classic fairy tale...or in this case fairy tail!

Favorite quotes:
"No one could be whole in a universe so divided."

"Go and you will see nothing is as wonderful as our dreams can make it."

"How many of us can choose to leave one self, one world behind and embrace another, better one?"

"So much pain and euphoria, a sense that, even though her own heart was broken the world could contain such beauty and magic she almost could not bear it."