In a world where being of mixed blood is a major liability, Sabina doesn't really fit in. And being an assassin-the only profession fit for an outcast-doesn't help matters. But she's never brought her work home. Until now.

Her latest mission is uncomfortably complex and threatens the fragile peace between the vampire and mage races. As Sabina scrambles to figure out which side she's on, she uncovers a tangled political web, some nasty facts about her family, and some unexpected new talents. Any of these things could be worryingly life changing, but together they could be fatal...

Sabina Kane:
She's down, but she's not out. 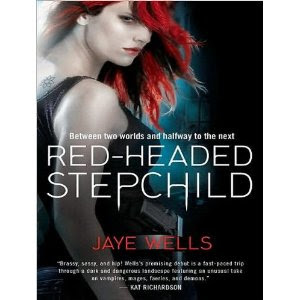 This is an ARC that I had requested from the author awhile ago. Jaye actually sent me book one and two with an autographed note. Ok so moving on to this much overdue review....

Red-Headed Stepchild has such an intense introduction that you are able to see immediately that Sabina has some psychological issues that she needs to overcome. The entire story is very descriptive. I am typically a non-political person. However the political situations, even though fictional, did capture my attention and had an opening with a great mystery.

I think that Sabina Kane comes in a close tie with Gin Blanco, (Jennifer Estep's fictional Elemental assassin, who are two main characters as the top paranormal heroines of 2010 that I immersed myself with. I loved the way that Jaye incorporated her sarcasism and humor and even ironical references such as Adam Lazarious in this novel.

I also sometimes run into novels that have a great storyline but still are unclear or confusing. This book simply spells everything out and doesn't leave the reader sitting on the curb contemplating. In Chapter 21 I was confused with a contradictory statement when Sabina states about being embarassed in front of her friends, but then in the end of the chapter she talks of not being/having friends? Either I was having a blonde moment, or maybe Sabina is simply bi-polar. LOL!

This was a final printed edition and not an ARC. I did find a few grammatical errors. I would suggest the editorial department should do a few extra editing runs before a final submission.

Favorite quotes:
"Never had a loss cut so deep. I worried I might bleed from the pain."

"Pain was my friend. It meant I was still alive."
Posted by Steven's Cybrary at 12:20 PM