We Were Here by Matt de la Pena

When it happened Miguel was sent to Juvi. The judge only gave him a year in a group home-said Miguel had to write in a journal so some counselor could try to figure out how he thinks. The judge had no idea that he'd actually done Miguel a favor. Ever since it happened Miguel's mom can't even look him in the eye. Any home besides his would be a better place to live.

But Miguel didn't bet on meeting Rondell or Mong or on any of what happened after they broke out. He only thought about Mexico and getting across the border to where he could start over. Forget his mom. Forget his brother. Forget himself.

Life usually doesn't work out how you think it will, though. And most of the time, running away is the quickest path right back to what you're running from.

From the streets of Stockton to the beaches of Venice, all the way down to the Mexican border, We Were Here follows a journey of self-doscpvery by a boy who is trying to forgive himself in an unforgiving world. 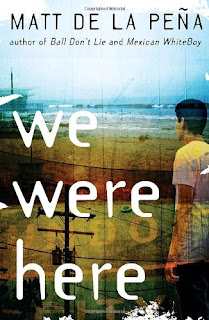 I had contacted Matt at some point in 2010 and he had so kindly sent me the final hardback copy of this book. The thing that most drew me to this book was the story of troubled youth in a children's home.

This was written so precisely like the age of the character, Miguel. It is amazing how deep into the characters Matt gets to give the reader a complete detail of the individuals. De La Pena's use of racial ethnicities is very profound from the beginning. Miguel's sense of being "alone" hits very close to home. Although a fictional character the scenarios that the kid faces do carry over into reality for a lot of juveniles in the foster care system, such as myself in my younger years. I know from experience.

I definitely felt a compulsion to Mong & Miguel's characters, forming a compassion for both. Rondell is such a sad and depressing character, but there's almost no "life" to him. I did enjoy the fact that the author incorporated real novels into his own fictional one with Miguel finding a passion in novels to escape his reality. As the story progressed my favorite characters revolved from Miguel to Mong to Rondell and back to Miguel.

I think this is a coming-of-age story where group home kids can escape and through their own versions of rites-of-passage become maturing adults.

Favorite quotes:
"You ever wonder why some people get so much darker than others? It's about people's genes, I know. And how all the continents were once connected or whatever. But how did it start? Who was the first person to come out looking all different from everybody else? Sometimes I trip on shit like that."

"By the way, I decided what I like about reading books. When I'm following a character does in a book I don't have to think about my own life."
Posted by Steven's Cybrary at 12:57 PM