A POST-APOCALYPTIC THRILLER IN THE TRADITION OF THE HUNGER GAMES AND GONE...

IN 2067, an airborne virus wiped out 97 percent of the male population. Thirty years later, women rule the world and have ushered in a new golden age on Earth. Poverty, crime, war, and hunger have all disappeared. Growing up in this utopia, fourteen-year-old Kellen Dent feels isolated as one of the few males alive.
When a rumored outbreak of the virus threatens Kellen's outcast father, he knows that he must warn him of the coming danger. During his desperate race to find his dad, Kellen uncovers a secret so frightening that his life and the future of the world will never be the same.
A fast-paced, post-apocalyptic thriller, Epitaph Road, is an exciting and fresh new entry in this best-selling genre. 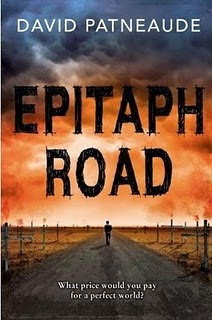 I found this novel on a website and quickly contacted David in request of an ARC and interview. The premise of this story is a Utopian like society supremely ruled by women in all manners of everything you could think of. The world is afflicted by an air-borne virus that kills 97% of the male population. It's a post-apocalyptic tale of how the world survives and overcomes every tragedy with the lack of males in the world. Starvation, poverty, gangs, violence, disease, drugs, and any other negative thing you can think of. It's a very creative and inventive outlook. One that I think has never been tried before, to my knowledge.

The edgy beginning keeps the reader interested in what is to come further in the book. It is also a very thought provoking tale. One aspect I think US children could benefit is taking history class year round like the students in the book do. The Elisha's Bear reference is a Christianity based one. I can't say if it is a fact  based one or not, but it certainly seems to be. With that said I think it should have been explained more clearly much earlier in the novel so the readers can understand the premise of it being used throughout the novel.

There was a huge and quite unexpected twist at the end of the story which I feel catapulted the story into an even bigger depth of talented penmanship. David has created a story in which almost anyone could read. If I were back in junior high or high school I would have wished this was one of our selected readings, as opposed to some of the mundane and monotanous novels we've had to read.

Thanks again to David for his willingness to do an interview with me and also send me the autographed copy of his story Epitaph Road.

xoxo
Posted by Steven's Cybrary at 9:36 AM