Imagining vampires at the heart of the social struggles of 1920s, Moonshine blends a tempestuous romance with dramatic historical fiction, populated by a lively mythology inhabiting the gritty New York City streets.

Zephyr Hollis is an underfed, overzealous social activist who teaches night school at the underprivileged of the Lower East Side. Strapped for cash, Zephyr agrees to help a student, the mysterious Amir, who proposes she use her charity worker cover to bring down a notorious vampire mob boss. What he doesn't tell her is why. Soon enough she's tutoring a child criminal with an angelic voice, dodging vampires high on a new blood- based street drug, and trying to determine the real reason behind Amir's request- not to mention attempting to resist (often unsuccessfully) his dark, inhuman charm. 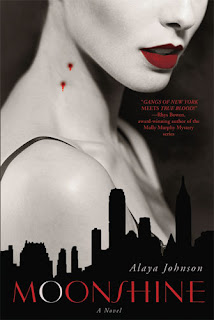 This was one of my 2010 Debute Author challenge's. I was immediately drawn to the story for it's vintage- horror appeal with the likes of flappers, prohibition, the classy little newspaper boys, old cars, and various other things. Another thing that caught my eye was the fact it is only 9 chapters long with a total of over 270 pages. I've never read a book like the way this one was laid out in that manner.

As I read Zephyr's story the way Alaya described things, I could very vividly imagine them in my head as if I were watching it on a movie. Overall I wasn't a fan of the story in the end. For me it seemed as if there were too many agendas going on from the beginning to the end. It almost felt like it was more of an encylopedia of supernatural beings: demons, vampires, faeries, djinns, ghouls, goblins. I also felt like the author was trying to use her skill of an extensive vocabulary. I love to learn new words, but it just seemed like...how can I put this...she could have "dumbed" it down a few notches?!

As much as I love to read sex scenes in my novels, I guess I am old fashioned. This novel is for the young adults. For me I don't believe the sex scenes should have been put in it. I am well aware of times being changed since even I was in high school, which isn't that long ago, but the fact of the matter is parents (if they raise their children with morals) aren't going to want their kids reading books featuring such scenes, in my opinion.

For me there really was only one good part in the whole story and that is when Zephyr was in the faust crazed vampire fight. Like I said, overall I wasn't a fan of the story. Although if this evolves into a series I admit I will be reluctant, but I will continue reading it.

Thanks again to Alaya for the opportunity to do this review, and allow me to mark off another of my debute novels from my challenge. I will leave you all with a quote from the book that had me thinking.

"We were all of us damaged, and I'd lost the knack of pinning blame."
xoxo
Posted by Steven's Cybrary at 11:45 PM