the cold.
Grace has spent years watching the wolves in the woods behind her house. One yellow-eyed-wolf-her wolf- watches back. He feels deeply familiar to her, but she doesn't know why.

the heat.
Sam has lived two lives. As a wolf, he keeps the silent company of the girl he loves. And then, for a short time each year, he is human, never daring to talk to Grace...until noe.

the shiver.
For Grace and Sam, love has always been kept at a distance. But once it's spoken, it cannot be denied. Sam must fight to stay human-and Grace must fight to keep him-even if it means taking on the scars of the past, the fragility of the present, and the impossibility of the futute. 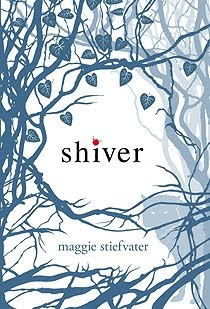 Shiver is a book that just called to me much like the Twilight saga, I read the synopsis on a website and was compelled to read it. I contacted Maggie about doing a review and interview. She emailed me back and had her publisher send me an ARC. One critic mentions a comparison to Twilight that surpasses the wolves in (Stephenie) Meyer's novels. I love the cover art bubble (raised) typing/graphics. Shiver is soon to be a movie made by Unique Films, a movie I am most looking forward too.

The story is a multi-view storytelling from the main characters named Sam and Grace. Both lead characters pull the readers into their gravity. One thing I disliked about the way the book was written is the chapters "temperatures." It was so confusing to me. The premise of this author's were-curse is that when it is too cold they turn into wolves; when it is too warm they turn into humans. However sometimes the weather was warm and they still turned into wolves. It just didn't seem to have a cohesiveness to it in that aspect.

Although the novel is a young adult oriented novel, it reads as if it were an adult oriented work of fiction. More than that tho, this book is able to appear to vast age groups, ethnicities, and cultures. The way Mrs. Stiefvater writes beautiful descriptions poetic-like. The thing with reading saga's like this one is that since Stephenie Meyer's saga it is hard to set aside your pre-existing thoughts on a new series like this one. Mrs. Meyer set the pace for sure in that regard, but Mrs. Stiefvater is definitely a "Leader of the Pack," as well! (Pun fully intended.) I admit that even as I tried to set aside my thoughts, I still found myself finding similarities. I don't believe that the story is read as "intensley- obsessive" as the Twilight books, but it was still quite attention grabbing. I apologize for all the Twilight talk.

I think I fell more into the story as the book was ending its final pages. At the time I was writting this review I was highly anticipating the continuation of Grace & Sam's story. I have since finished Linger, book 2. Here is a quote I enjoyed from Shiver.

I think for me this was the most powerful quote in the entire book. When people are used to hurting for so longer they become numb to it. Hope is the only thing to look forward to which sometimes can be unattainable. The hope can hurt more than the pain because of that. That is my interpretation.

Special thanks again so much to Maggie and M. Marshall from Scholastic Inc. Publishers for sending me a copy of Shiver and allowing me to do this review.

xoxo
Posted by Steven's Cybrary at 8:11 AM