Sam Bass is tall and lanky, loves old western movies, wears cowboy boots, and drives a beat-up Jeep Wrangler. He's a hot-shot pilot running a shoestring charter business on remote Ocracoke Island, and he has a gorgeous girlfriend, Valerie a Cherokee widow with a young son.

When Sam makes a daring and dangerous rescue of a couple lost at sea in a storm, he gets publicity he definitely doesn't need.

The Cowboy, as he's known to certain people, has been located and a hit team is dispatched to take care of unfinished business. Sam, Valerie, and her son are suddenly the focus of evil. Their world erupts with violence, and the only response is a trail of just vengeance as ancient as the ghosts of the Smoky Mountain Cherokees.

The bloody hunt is on... 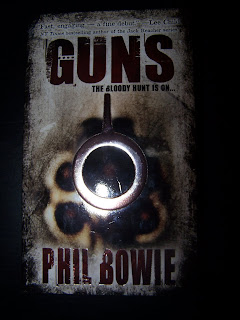 I originally found Phil's books last year at The Bear's Den in Cherokee, NC. After coming home from my trip I forgot the books and the author's names. I was in the process of reviewing Vicki Hinze's Forget Me Not when I came across a synopsis for them in the back of her book. I became so excited I quickly googled his website and emailed him. Phil didn't take long at all to reply back. He offered to send all three of the John Hardin series as well as doing an interview.

The great thing, for me, about these books is the publisher Medallion Press. This company is just phenomenal and very "reader- friendly." If I can recall right, I believe I received the books not more then a day or two after our initial contact. Talk about speedy delivery. Phil was so gracious as to autograph all three novels as well. Sweeeeeet! The biggest attraction for me to Mr. Bowie's books was the Native American aspect. Being Native American myself it was nice to find a book that featured my culture in it and was an interesting twist.

This was the first "growed-up" book I have read in 2010. The story was a very fast paced suspense. There were quite a few characters who I enjoyed but none more than the Gaskill's. There was a point in the story where there was this utter, heartfelt moment. It was almost like it was a story within a story. I don't want to give away anything more than that . Just know that when you reach the point I'm referring to; that your heart will just smile in such warmth. It's overwhelming when an author can create such fictional characters like them that touch upon your soul...fictional or not.

The ending of the story was quite suspenseful as the rest of the book, if not, even more-so! I am not a reader who enjoys flash back sequencing, but this was ok. Although I would have given this book a A+ if it were timeline written. Who am I kidding, it's still an A+ but you get my point. I would recommend this book to any fan of mystery, supsense, and (Jason) Bourne readers.

Thanks again Phil for your books, authographs, interview, and simply just being an amazing person.

xoxo
Posted by Steven's Cybrary at 8:44 AM