The Secret Life Of Bees by Sue Monk Kidd

Set in South Carolina in 1964, The Secret Life Of Bees tells the story of Lily Owens, whose life has been shaped around the blurred memory of the afternoon her mother was killed. When Lily's fierce-hearted black "stand-in mother," Rosaleen, insults three of the deepest racists in town, Lily decides to spring them both free. they escape to Tiburon, South Carolina- a town that holds the secret to her mother's past. Taken in by an eccentric trio of black beekeeping sisters, Lily is introduced to their mesmerizing world of bees and honey, and the Black Madonna. This is a remarkable novel about devine female power, a story that women will share and pass on to their daughters for years to come. 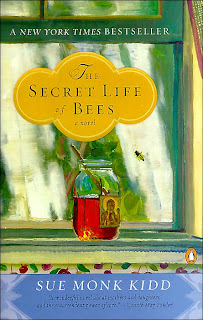 The biggest motivation for me to read this book was the movie version. The movie was such a heart wrenching story. In my opinion the books are always better than the movies and so I had to prove my point. For me, I was comparing so much of the book to the movie. If I can recall right, the way that Lily & her mother are described in the story are nothing alike the movie adaptations. I also feel that there were many parts of the story left out of the movie, such as; the parts where characters appear to be daydreaming or something and really thinking of critical moments that give the story a very strong depth. I can't remember June apologizing to Lily in the movie version either. In the movie T-Ray found Lily by a map not a phone call like the book states. That was another part that had me a bit confused but I can see how it is possible to do so. My last gripe between the movie/book versions is that in the book at the end when T-Ray comes to take Lily, it is the Daughters of Mary who stand up for her. In the movie version it is Rosaleen, June & August.

Overall this was a beautifully written story that addresses racism and cruelty. It is easy to see looking back in time that slavery times and segregation are not that far behind us.The story is an eye opener into people's ignorant perceptions and beliefs that certain people are more important than others. That thought process hasn't changed. We still encounter racism in various forms of race, gender, sexuality, religion. If there is any book that can be an educational tool, it would be The Secret Life of Bees. However more than breaking racist barriers, this is a tale of family and of voids. Family knows nothing of sex, color, race, politics and religions! Family knows what it is- simply that, family.

I sincerely can't express how much of an inspiration this book is. Thank you Sue for such an elegant use of words. They have blended together and created a beautiful story that will live on for ages.

Occasionally I find quotes from books that have a sense of purpose and/or meaning to me in one form or another. Here are a few that I just couldn't forget....

"Loss takes up inside of everything sooner or later and eats right through it."

"The world will give you that once in a while, a brief time-out, the boxing bell rings and you go to your corner, where somebody dabs mercy on your beat-up life."

"From now on when people asked me what I wanted to be when I grew up, I planned to say, Amnesiac."

"If God said in plain language 'I'm giving you a choice forgive and die,' a lot of people would go ahead and order their coffin."