The clientele at Shore's clothing store includes some of L.A.'s sexiest bachelors. But none of them affects Megan DeLacey as deeply as the dark-eyed stranger who strides into her boutique one evening- and keeps returning, night after night. Megan is drawn to Rhys Costain even as she fears him. Because his reason for being there is clear- he wants Megan, with an intensity that's both tempting and terrifying...

For almost five centuries, Rhy has lived alone, using women as it pleased him and never wanting more. As Master of the West Coast vampires, it's his duty to eliminate the ancient vampire who's draining humans on his turf, putting all of their kind at risk. But Megan's lush beauty and vibrant warmth is blinding him to a danger that will soon engulf them both- and tear him from the only woman who can satisfy his darkest hunger... 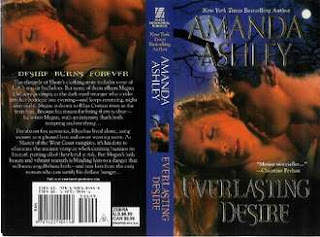 First off, I hate to sound like a brown-noser, but I simply can't say enough good things about Amanda Ashley. Not only is she a talented authoress, but she also sets aside ample time to interact with her fans and readers. So I couldn't have been more happy than when I came home from a three week stint to find the ARC of Everlasting Desire she had offered to send me. Thank you Mandy again for another exciting opportunity to do a review for one of your upcoming novels!

My first comment on this ARC was the continuation in the Everlasting books. If you scroll through my past reviews you will notice the Everlasting Kiss review, book one. I have to admit that I fell in love with Rhys Costain's character in book one. I am a sucker for the bad boys er vamps! This was a nice twist to Mandy's previous books. The hilarious mixture of vampires, sex and name brand fashion was enticing.

As you all know I love a saga, series or collection of books. For me I really enjoyed that Mandy has brought back characters from the previous novel into Everlasting Desire. Another thing I liked was that she has no qualms on killing off her characters without endangering the plot of the story. Even more so, the deaths aren't of a simplistic style. She weaves in gritty details into why and how they die. Not to berate other authors, but sometimes they choose to kill off a character and it just seems they ran out of thought, or story. As a reader it gives us a thought that maybe we don't want to read anything further from them because of that. I am thankful Mandy has the gall and the creativity to stand out amongst them.

A few random thoughts on the story:
There's a comedic thought on a vampire fretting over what to wear to impress a mortal. (With all of their preternatural powers, you think this would be their last thought!) It really was a laugh-out-loud moment.

There were a few parts that reminded me of True Blood's sense of humor and drama. Towards the end I think there was a similar Twilight.aspect of the story at first. I was glad to see that it did divert and change directions.

I sincerely hope the Everlasting books continue on. There are so many wonderful characters and opportunities for further growth in this early collection of novels. You can find this book in stores October 2010. If you haven't read Everlasting Kiss you still have plenty of time to read it before the release date of this book.

I will leave you all with a few quotes I enjoyed:

"Mortals never changed...They were always looking for new and better ways to destroy themselves."

"Mortals and vampires and witches. Oh, my."