I dream all the time. I dream I'm someone Denby might like better but I don't like at all, someone who never quit school, someone who works his tail off, someone who- get this- keeps trying to get her to marry me. My drunk, deadbent father's around, too. I take him to AA meetings. I help pay the mortgage. I must be nuts.

After days of trying to do the right thing, I always dream I'm doing the wrong thing, that Dad's vanished, probably drinking, and that I am smug and stupid. I quit school, play lousy songs, in a cofee-bar dive, and think it's the center of the universe. I don't want to commit to anything- not to my music, not even to Denby. I just think life's a game. A game? Only in my dreams. 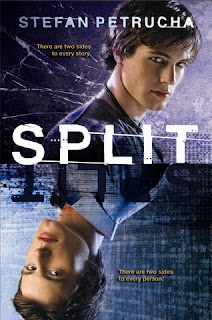 I found one of Stefan's books on some website earlier this year and was eager to read it. However the book I wanted was already published. So, Stefan offered to send me his newest work instead, Split. He also agreed to do an interview which is already in a previously posted author interview.

Firstly the cover art reminds me of something I would expect to see in a school library back when I was in school. It definitely has the art to appeal to it's age-specific audience. If I were in the library and seen this I would have grabbed it up out of curiousity and read it. This novel for me was a bit confusing to read. It was like reading two novels in one. The author clearly delineates the differences of the "personalities." For me it was just missing something that could make the story more....clear? (I'm treading water here in order not to offend!) Another problem for me was there was this "computer- nerd" language throughout the story that just wasn't for me.

Split has a sense of sci-fi appeal. Speaking of some alien best friend of Wade's. I couldn't tell if the alternate Wade was a dream, a figment of his imagination, or simply and alternate version of himself he created to cope with his complicated life and settings?? Overall this novel was hard for me to follow. It reminded sme much of how I felt with Fight Club. If a novel could ever cause my brain to hurt out of confusion this one would do it. Personally this novel was not to my liking.

With all that being said, I want to thank Stefan for the opportunity for making this review possible. I also want to thank him again for the interview he so willingly was a part of. Stefan is an established author and I am sure this novel isn't the last we will see of him. Congratulations on all of your success and in your continued works for the future.
xoxo
Posted by Steven's Cybrary at 9:00 AM