If I Stay by Gayle Forman 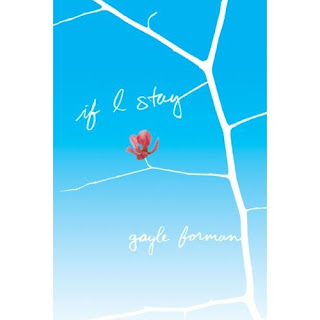 "Just listen,” Adam says with a voice that sounds like shrapnel.

I open my eyes wide now. I sit up as much as I can. And I listen.


Choices. Seventeen-year-old Mia is faced with some tough ones. Stay true to her first love—music—even if it means losing her boyfriend and leaving her friends and family behind?


Then, one February morning Mia goes for a drive with her family, and in an instant, everything changes. Suddenly, all the choices are gone, except one. And it’s the only that matters.


If I Stay is a heartachingly beautiful book about the power of love, the true meaning of family, and the choices we all make.

I was cruising thru Barnes & Nobles and found their various top book categories. Fiction, horror and young adult novels are always the ones I feel compelled to read. I quickly glanced their YA Top 10 of 2009 and seen the title "If I Stay." There was just something captivating about the title. I took notice of the author's email and contacted her as quickly as possible. Gayle had informed me to contact the publisher which is how I became in contact with Allison Verost, Senior Publicist with Penguin Young Readers Group. Allison contacted me back in a very quick time frame and told me she would send it out. I think I received it in less than 5 days? The book arrived with a different cover, one I think is more age appealing to its audience, than the original one pictured above. It also came with a few pages of reviews, and a short article in reference to Twilight. Summit, which is the company responsible for the making of Twilight into a mega-movie blockbuster, is turning "If I Stay" into a film as well.

Upon the beginning of this book, Gayle, has a way of transporting the readers into a movie scene in their heads. It is so very specifically worded that it grasps the readers attention and refuses to relinquish it. The way that the reading is so fast paced, there is nothing even remotely monotonous about it. One reviewer said it was reminiscent of "The Lovely Bones" by Alice Sebold. In my opinion that's like comparing butterflies to snakes. The only thing in common the two have are that they're both about young girls and an out of body experience.

For me I had two favorite scenes. The first is the scene in the ICU unit with Gran & Gramps.

"Do you think she decides?"
"Decides what?"
Gramps looked uncomfortable. He shuffled his feet, "You know? Decides," he whispered.
"What are you talking about?" Gran sounded exasperated and tender at the same time.
"I don't know what I'm talking about. You're the one who believes in all the angels."
"What does that have to do with Mia?" Gran asked.
"If they're gone now, but still here, like you believe, what if they want her to join them? What if she wants to join them?"
"It doesn't work like that," Gran snapped.
"Oh," was all Gramps said. The inquiry was over.

Reading that scene I was in tears, and felt like someone had taken all the oxygen from my lungs. It was truly one of the most poignant scenes in the book for me. The second was the final scene in the ICU with Adam & Mia. I don't want to give away the end so I refuse to put that scene on here. This was the most heartbreaking novel I have read this year. I read this in about 4 hours. I actually had to keep taking breaks from reading because it was so sad I couldn't bear to read any further. It is easy to see why it was ranked in B&N Top 10 YA Novels of 2009. My only complaint is why it was ranked as 9 and not any higher? This is more than a young adult novel. This is a novel both young adults and adults alike will enjoy.

Thank you again to Gayle Forman for writing such a beautiful and heart wrenching story. Thanks also goes to Allison Verost for sending it to me at such a quick speed.
xoxo
Posted by Steven's Cybrary at 12:58 PM