What Hides Inside: BCPI Series Book 2 by Ally Blue 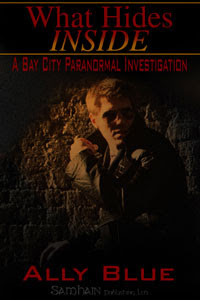 For the BCPI team, facing a horror from another reality could be deadly. For Sam and Bo, facing their own secrets and lies could be far worse.


Sam Raintree’s life changed forever when he started his dream job with Bay City Paranormal Investigations. In one fateful week, he learned he was psychic, discovered he possessed the power to open interdimensional portals, and accidentally let loose a horror like he’d never imagined. He also began a relationship with his boss, Dr. Bo Broussard, a man who’d been in the closet all his life.


Now, three months later, the burden of secrets has become too heavy for a fragile relationship to bear. Bo isn’t ready to come out, and Sam is tired of hiding. When Bo hires a new investigator, Dean Delapore, Sam is intrigued in spite of himself. Dean is bisexual, attractive, and very interested in Sam.


During the intense investigation of South Bay High School, from which three students have mysteriously disappeared, Sam and Dean draw closer together, while Bo pushes Sam away despite their feelings for one another. When the investigation erupts and Sam comes face-to-face with his worst nightmare, he has to decide whether to fight for Bo’s love, or let him go.

Again, I want to thank Ms. Ally Blue, or just "Blue" as I have become to call her as of late, for so kindly and graciously sending me another wonderful novel. After I had finished Oleander house, book one, I was so eager to continue the series. I was more adapt at liking this book more than its predecessor. I only say this because of my opinions from that book in comparison to this one (see Oleander House by Ally Blue post), seemed to have grown up. If that makes sense? Ally's characters have evolved more, as the story has, which in my opinion makes the entire book a growth as well. (I am quite sure that is a run on sentence from hell, but shoot me!)

The only thing I can complain about in this book is in the beginning there's a scene where a character asks another to come in, that has already left? Maybe I just read it the wrong way? Now to the good stuff....

Like I said the continued story flows so well, at first I felt it had a missing gap in the end of book one to book two. However I realized it must have been written that way for dramatic effect? I found myself in book one despising the heinous bitch Cecile, only to find in book two how much she has matured. It was almost as if Blue has totally ripped Cecile out and replaced her with a new person. I really did enjoy Cecile's growth and at times I even felt like I could imagine her as one of my friends. With Blue replacing Cecile's HBS (Heinous Bitch Syndrome) into Janine, you still had the one character in every book you just love to hate.

I found myself looking at the chapter seperators one night in bed, and began to laugh hysterically. I think a large part was due to sleep deprivation, but I noticed how the seperators were the numerals six and nine. Leave it up to her to add a quirk that some people would have go unnoticed. After reading quite a few of Ally's books, I found myself skimming through future chapters hungry for what happens next.

The characters she writes about are just so vivid that any reader can imagine them as family members, friends, or even strangers on the street. Also there is a more in-depth feeling(?) with more knowledge of the supernatural beings from book one that return in book two. I enjoyed the ending to What Hides Inside way more than I did with Oleander House. It felt like there were no loose ends, yet it was open to continue to book 3, even tho Sam doesn't end up with who I wished he would be. Read the book for yourself and tell me who you think he should be with.

I am anxious to further continue the Bay City Paranormal Investigator series, and see what kind of trouble the team gets into next. ....
xoxo
Posted by Steven's Cybrary at 11:44 PM