FOR THREE TEENAGERS, DARK MYSTERY HAS ALWAYS LURKED AT THE CORNERS OF THE EYES AND THE EDGE OF SLEEP.

At a secret summer rave in the woods, these teenagers learn of their true origins and their uncertain, intertwined destinies. Riveting, unflinching, and beautiful, Betwixt shows a world as complex and compelling as any ordinary reality. 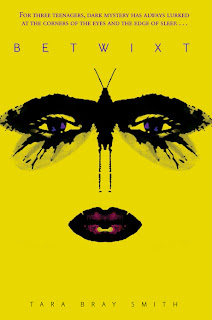 I wonder to myself, how could I have never heard of this novel before? Betwixt was released in 2007, somehow I wasn't given the memo!! I found Tara's book online. The story had a very mysterious and intriguing appeal to it. After I had contacted Tara she so kindly went above and beyond and mailed me the novel all the way from Germany! I can't express to her my deepest gratitude and appreciation in doing so.

Of all the characters in the story, I believe my favorites would have to be Nix, K.A., Ondine & Moth.
Nix I think I liked because of our mutual Native American heritage. There also seems to be a sense of aloofness, yet hidden maturity that he doesn't find the most convenient ways to use for his benefit. K.A. just was such a cute character. The whole little brother aspect, his genuineness and ability to see the good in almost everyone. Ondine was just a mystery for me, even up until the end. Moth was a very weird character. There were so many things about him that just weren't right. Yet when it comes down to it, he is one of the more appealing, stand-out characters throughout the novel, for me! I would like to say I liked Morgan. At first I did. As the novel progressed she took a downward spiral in my top fav's.

This book was simply unparalleled (sp?) to any prior YA novels I've read, when it comes to the way the characters speak. The speech was written with such precision- in that you can read the book and in reality hear teenagers and kids talk with the exact phrases and mannerisms she (Tara) has written. In part one things slowly began to roll and you know you're set for a big adventure. Although the feeling of adventure in part one was small, it was known.

Part two catapulted into that adventure without hitting the brakes. If a book could get a speeding ticket, Betwixt should. The adventure was one that I very happily didn't expect. (It wasn't predictable...in any sense!) Part three was more of a clarification of Nix & Ondine's circumstances. Part four was almost like a preparation for an unforseen but possible battle? As for part 5, I was so intent and enthralled in finding out what happens next. Besides, it's the last section of the book it's not fair to give the "ending" away. This is definitely another book, hands down, that I can't wait to start the sequel.

Favorite quotes:
"They'd never had jobs. They didn't know what five hours of wiping steamed milk off every conceivable flat surface, including the ceiling, felt like. Cleaning toilets stuffed with tampons, making a macchiato four times for an eleven-year-old punk and his yuppie Medusa of a mother because he 'hadn't gotten it the way he likes it at home.' Spoiled brats."

"Neither brother and sister, nor Romeo & Juliet, but lovers all the same. It was as if they had found their other half, the wing that allowed each to fly."