My name is Gin Blanco. They call me the Spider. I'm the most feared assassin in the South - when I'm not busy at the Pork Pit cooking up the best barbecue in Ashland. As a Stone elemental, I can hear everything from the whispers of the gravel beneath my feet to the vibrations of the soaring Appalachian Mountains above me. My Ice magic also comes in handy for making the occasional knife. But I don't use my powers on the job unless I absolutely have to. Call it professional pride.

Now that a ruthless Air elemental has double-crossed me and killed my handler, I'm out for revenge. And I'll exterminate anyone who gets in my way - good or bad. I may look hot, but I'm still one of the bad guys. Which is why I'm in trouble, since irresistibly rugged Detective Donovan Caine has agreed to help me. The last thing this coldhearted killer needs when I'm battling a magic more powerful than my own is a sexy distraction...especially when Donovan wants me dead just as the enemy. 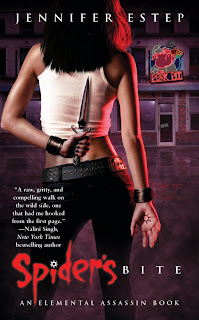 I happened to notice this book in a Wal Mart store sometime earlier this year when I was living in North Carolina. I contacted Jennifer and due to some publisher's limiting the amounts of books they send to their authors, she sent me the e-book along with Web of Lies (June 2010). Jennifer included a press release that also states book three in the series, Venom, will be released in October, 2010. As I browsed through her website I noticed she was offering bookmarks. Much to my surprise, she sent me I think 9 total. As you all have seen one of them is a result of this month's contest! In addition to all of that, she also allowed me the opportunity to interview her. On August 2 I will post the interview with the name of the winner of the contest.

The novel is based in Ashland, NC. As I read the novel it appeared to have so many of the same charateristics of Asheville, NC. I have a feeling this was her inspiration to base the novel on. This was an action packed book. The scenes were filled with bloody assassinations! Aside from the major Elementals, the story also featured vampire hookers, dwarf socialite beauticians, giants, and who knows what she may include in Web of Lies and Venom? The Elemental characters posess powers that are more interesting than your typical superheroes.

The tension between Gin, the Spider, and Donovan Caine was palpable. The culinary cooking sections were just....? It fit in with the story, but at the same time I felt that it was overplayed more than it should have been? As all books in series, or the great ones anyways, this one left you with a surprising ending to pave a way for the next book. This is a series I hope continues for a long time. If so, I can definitely see myself following the Spider's story in physical book format. The e-books are just not as convenient to read while traveling and various other family emergencies that I ran into. Thanks again to Jennifer for a new and interesting series that has grabbed my attention outside of my typical book reviewing.

Favorite quote from the book:
"Easy was for people too weak to suck it up and do what needed to be done. And I wasn't weak. Not anymore."
xoxo
Posted by Steven's Cybrary at 5:56 PM