IT'S SATURDAY NIGHT IN SANTA BARBARA,
and school is done for the year. Everyone is headed to the
same party. Or atleast it seems thay way. The place is packed,
The beer is flowing. Simple, right?
But for eleven people, the reasons for being there are way
more complicated....

to confront my ex
to hook up (since that's what everyone expects)
to make a friend...any friend
to numb the pain
to finally talk to her
to piss off my parents
to say goodbye 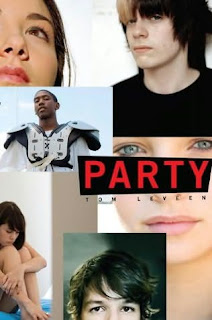 I don't know where I found Tom's book originally. But I am thankful I did! This was another one of my 2010 Debut Author Challenges. This book put me in the mind of all the great teen movies from when I was in high school....Can't Hardly Wait, 10 Things I Hate About You, etc...and even The Breakfast Club.

My favorite characters in the story were Beckett, Morrigan, Azize, and Anthony. Beckett is a lonely-outsider. She faces so much due to her mother's sickness that it makes her become reclusive and even lose her best friend. I recall a lot of my childhood of feeling that same way. I was never a people person in school, and was very shy. No one would ever think so now, but I can definitely relate to Beckett for sure! Morrigan is another of my fav's. She is the rebellious one. Morrigan rebels to get her parents attention and a confirmation that her father does love her. I also have been in her shoes. When I was 14, my rebellion began for many reasons of my own. For the most part it all backfired of course! Azize was the second most character I related to, aside from Beckett. He faces so much prejudicism due to his ethnicity and skin color. When you are a minority such as myself it really makes you upset when you see people hurting others for the sake of ignorance. Anthony was the last character I related to. His brother was off in the war and wounded. Anthony took it hard and caused him to take a negative outlook on things. Again, I can relate to that as most people can. When something so devastating happens to you it is only normal to be afraid and create a defense mechanism.

I really enjoyed this refreshing and easily relateable novel. Tom's interaction with kids in his work life clearly shines through in his debute novel. I encourage you all to read it. There are other characters in the story you may relate to. Such as:Tommy, Brent, Daniel, Ryan, Josh, Max, and Ashley. All the characters have their own story to tell. Find out which ones you like. Which ones remind you of yourself.
xoxo
Posted by Steven's Cybrary at 9:47 PM