AS THE NEW GIRL AT ST. SOPHIA'S BOARDING SCHOOL, LILY PARKER THINKS HER CLASSMATES ARE THE MONSTROUS THINGS SHE'LL HAVE TO FACE-BUT OH, HOW WRONG SHE IS.

When Lily's parents decide to send her away to a fancy boarding school in Chicago, she is not happy. Lily's classmates are the ultrarich brat-pack type- and if that isn't enough, she's hearing and seeing bizarre things on St. Sophia's creepy campus.

The only thing keeping her sane is her roommate, Scout, but even Scout's a little weird- she keeps disappearing late at night. When a prank leaves Lily trapped in the catacombs beneath the school, Lily finds Scout, who's running from a real-life monster. Scout is part of a splinter group of rebel teens who protect Chicago from demons, vamps, and the gone-to-the-dark-side magic users called Reapers. She lets Lily in on her secret, even though Lily has no powers of her own...or at least none she's discovered yet. 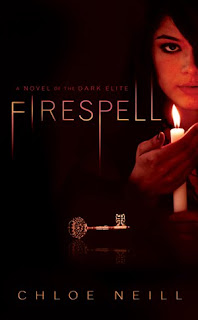 You see even when your cell phone is "MIA," the camera phone function works just great! I took a pic of the book so I could remember to contact Chloe on doing a review. Much to my surprise she happily sent me a copy. One of the cool aspects for me in this novel was the name of a character, Marceline D. Foley. I have never read a book that featured my last name. It sounds lame, but to me I thought it was cool. Whatever to all of you haters! :)  The abruptness of Ms. Foley reminds me of Maggie Smith in Sister Act or even in Harry Potter.

The story read like the subtext of Buffy, without the kitchsy humor. I feel it has an amazing potential to become a tv series if the author chooses to pursue this into a series. The end leaves you with a suspended state. You're unsure if that was the end, or if there's more to come in the future. Hopefully it's the latter, because I would really be eager for a continuation in this story.

Thank you again to Chloe and Caitlin Brown from Signet/US Penguin Group Publishers for the opportunity to make this review possible.
xoxo
Posted by Steven's Cybrary at 9:00 AM