Young Tessa is a diminutive girl, far too small for farm work and the object of ridicule by both her own family and the other children in their isolated Midwestern community. Her father seems to believe in nothing beyond his crops, certainly not education for his misfit daughter. When a mysterious, entrancing librarian comes to town, full of fabulous stories, earthy wisdom and potions for the lovelorn, she takes Tessa under her wing, teaching her to read and to believe in herself, and a great new magical world of possibilities opens up. But even as she blooms, Tessa's father begins sexually abusing her. And then her mentor, who carries a dark secret of her own, drowns herself.

Tessa runs off, following Mary's footsteps, to join the circus as a trapeze artist, where she marries a loving man and finds a fulfilling new life for herself amid her new circus family. But she remains haunted by her past. And when a stranger from one of Mary's fabulist tales shows up, she risks everything to follow him to Rain Village where she might finally understand the meaning of her mentor's tragic secret.

Set in the early part of the 2oth century, steeped in emotional turbulence and down-to-earth wisdom, RAIN VILLAGE is an enchantment, pulling us into a world of mystery and possibility where love, friendship and loyalty might either destroy or set one free. 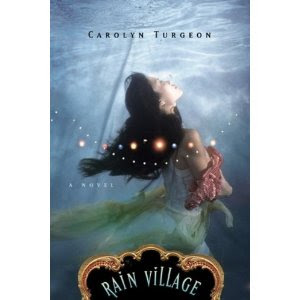 Although this novel came out a few years ago, before Godmother (see previous review posting) I felt compelled to do a review on it anyways. This eccentric story weaved religion, superstition and fairy tales with reality- and sometimes the reality isn't a pretty one! I think that any person faced with racism or even as an outcast will find this an empowering journey into their own psyche. There's just about every possible form of pain featured: physical abuse, sexual abuse, mental abuse...

Although the synopsis states Mary's suicide, the way the story is written you still feel like you were thrown a curve ball. This is when the story becomes interesting. Throwing you into the circus life. You get to know so many fun characters it's like meeting the cast of a real one. As I enjoyed Godmother, likewise did I enjoy this book too.

I did feel the first couple of chapters were slow flowing, but once you pushed past them you keep coming back for more. I also think the title seems a bit off? It's not until the last two or three chapters that you are really involved in Rain Village. Aside from that, this adult fairy-tale like novel is a heart warming tale of a young girl's journey to find happiness, love and most importantly a place to belong. Great summer read!

Favorite quotes:
"...People have a habit of doing that sometimes-just falling away, out of some lives and into other ones..."

"It's a good place this library. Like entering another world."

"People try to shut out beauty wherever they can in this world, but it's a mistake."

"It is strange, how people drop out of your life, like tears. The way the whole world can shift and change, the way you can choose to remake it. Choose to become someone new."

"Love is an illusion, and there is a bitter nut at its core."
Posted by Steven's Cybrary at 5:15 AM