He and his beautiful Cherokee girlfriend, Kitty Birdsong, are enjoying life in the Great Smoky Mountains when Nolan Rader, a former BATF agent, emerges from John's violent past and demands help to save his younger brother, Clint Rader from the vengeance of an outlaw motorcycle gang known as the Satan's Ghosts.

A warped genius called Brain controls the Satan's Wraiths, an elite cadre of trained hitters within the worldwide gang, and Brain is privately conducting psychological research on Clint prior to killing him.

John must agree to help Nolan Rader or face exposure about his past- and the only way to find out what he must know to save Clint Rader is to infiltrate the biker gang. This leads him down a lethally dangerous path between the law and the outlaws, ranging from Canada to the Bahamas.

As events close in and the execution draws near, can John find some way to save Clint Rader before time runs out? 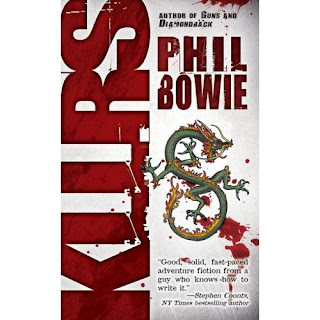 This is the third installment of the John Hardin saga that I had requested ARC's from Phil Bowie published by my friends at Medallion Press. The intensity is back full force in KLLRS, as it was in Guns. Personally I think that Guns & KLLRS were the better parts of the saga (Guns, Diamondback, KLLRS). If you're not a Bowie fan, you would miss out on the Lee Child (author) reference used. The ending was the equivalent to the best 4th of July fireworks display you have ever seen. It was mildly hilarious but definitely very suspenseful.

Things I fought with in this novel were small. Such as the scene with Keller, Engle & Rader. I had anticipated a more action-packed scenario. Another thing was the Campion family, it was never really explained. Or, I read over it. It just seemed as tho' the connection between Brain and the Campion's was undefined.

Favorite quotes:
"On the TV every ten minutes there is a pill for this or a pill for that. To help you sleep or stay awake or lose weight or love your woman. Can they show me a pill that does you no harm while it tries to do you a little good?"

"Memories are a wondrous part of the great gift."
Posted by Steven's Cybrary at 3:52 PM