LORD LACHLAN DE DOUGLAS, A NOBLE WARRIOR LORD, IS HEIR TO A CLAN OF ANCIENT EARTH. BOLD, REBELLIOUS, POSESSING STRENGTH AND PASSION, HE DEFENDS HIS CLAN FROM ANNIHILATION AGAINST A WRETCHED WAR OF MASKED VENGEANCE AND TREACHEROUS SHADOWS. UNTIL ONE DAY, A SUDDEN HORROR ALTERS HIS BEING, CONDEMNING HIM TO A WORLD OF PRIVATE ANGUISH AND TORMENT.

KIMBERLY KINSALE, A DIPLOMAT'S DAUGHTER, IS A RARE BEAUTY MOTIVATED BY HONESTY AND INTEGRITY. SERVING AS A LIEUTENANT IN AN ELITE COMBAT FIGHTER GROUP ABOARD A WAR SHIP. SHE GOVERNS HER LIFE BY THE INTRIGUE AND LIES OF HER COMMANDING OFFICER. A MOMENT OF LUNACY AND FOLLY. A SECRET REVEALED. A SECRET REVEALED. AND KIMBERLY STUMBLES UPON AN UNSPEAKABLE DECEPTION.

NOW SHE MUST DECIDE. MAINTAIN HER LOYALTY, OR BETRAY HER CLAN AND SHIP FOR A DOUGLAS ENEMY LORD WHO CAN PROVE THE TRUTH NEVER-KNOWING THE BATTLE FOR JUSTICE WILL TAKE HER THROUGH LACHLAN'S NIGHTMARE, A RAGE SO DEEP, A SUFFERING GROUNDED IN SHAME AND PRIDE, EVEN WHEN PEACE SHINES IN SIGHT.

FOR THEIRS IS AN UNEXPECTED PASSION, BORN IN THE FIRES OF A SHARED NEED AND DESPERATE STRUGGLE. KIMBERLY MUST FIGHT THE SINISTER LEGACY OF THE MATRIX ROBOTS AND TRUST THE HANDSOME ENEMY LORD WITH HER LIFE, HER HEART, AND HER VERY SOUL. BUT AS TIME SLOWLY RUNS OUT, EVEN AN EXQUISITE LOVE MAY NOT BE ENOUGH FOR SALVATION. 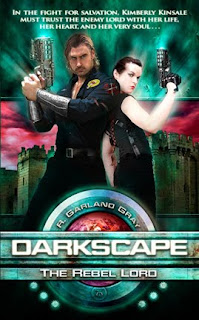 First I want to thank Ms Gray again for allowing me the opportunity to review a second book for her, in addition to the previous interview. I was immediately drawn to this book for its Star Wars-eque appeal. Like her Faery Faith series, she includes a glossary of various terminology to help understand what is going on. It is highly evident that the author has a clear attraction to Ireland and Scotland. You can see that from both the Faery Faith & the Darkscape novels.

One interesting concept was the fact even in the "futuristic" year 3187 the author writes of dementia still not having a cure. While we're on that topic, the medical science-technology talk was slightly confusing but it was pertinent to the story itself. Another thing confusing for me was the matrix robots premise. I wasn't sure if the robots were ROBOTS, or if they were humans with some kind of robotic enhancement? One character seemed as tho they were a robot, but had more humanity to them, as opposed to another who seemed fully robotic?

There was also a semi-rape type scene that was just too weird for me. As if rapes aren't weird enough, this put some pseudo-future-sci-fi twist to it that just wasn't right for me. As I was reading tho, I did find myself looking back at the cover to confirm the character descriptions. Typically I don't do this, so why I did, or why I even wrote down the notes I am not sure of?!

Had the author not continued the story into two more novels, I think the ending would have appeared quite rushed. I am looking forward to the continuation in this Scottish Star Wars like saga.

Some quotes from the novel:

"Most things worthy are not easy."

xoxo
Posted by Steven's Cybrary at 9:00 AM