Dana Hathaway doesn't know it yet, but she's in big trouble. When her alcoholic mom shows up at her voice recital drunk, again, Dana decides she's had enough and runs away to find her mysterious father in Avalon: the only place on Earth where the regular, everyday world and the captivating, magical world of Faerie intersect. But from the moment Dana sets foot in Avalon, everything goes wrong, for it turns out she isn't just an ordinary teenage girl- she's a Faeriewalker, a rare individual who can travel between both worlds, and the only person who can bring magic into the human world and technology into Faerie.
Soon, Dana finds herself tangled up in a cutthroat game of Fae politics. Someone's trying to kill her, and everyone seems to want something from her, from her newfound friends and family to Ethan, the hot Fae guy Dana figures she'll never have a chance with...until she does. Caught between the two worlds, Dana isn't sure where she'll ever fit in or who can be trusted, not to mention if her world will ever be normal again. 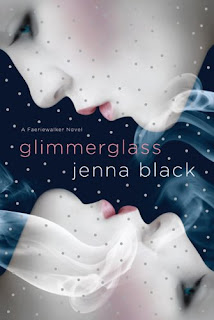 This was another of my 2010 Debut Author Challenges. I thought there would be a hesitation but it jumped straight into the faery realm. The story managed to weave reality (modern day issues i.e. alcoholism, teenage rebellion) with myth. I actually learned of some new fae mythology because of this book- glimmerglass and spriggans. Reading wise, the story had a very subdued, laidback flow.

Originally I made a note that the first 100ish pages revolved around nothing more than a very tiny bit of everything else, but mostly filled with Dana's moving around from one safe place to another. It bugged me because it felt like THAT was the story when the story should have been more focused on other events. I also wanted an explanation of Dana's cameo. There was a brief glimpse at it, but basically you had to figure it out on your own.

This has been the first book this year that I have been stumped on. Typically I know right away if I reallyyyyyyyyyy love a book or I reallyyyyyyyyyy hate it. This novel, however, has me hesitant. I want to give the upcoming sequel a shot and hopefully that will give me an insight to whether or not I will pursue this new series any further.

Here are a few quotes I enjoyed:

"If lightning had shot from the heavens and struck me dead at that moment, I might have welcomed it."

"...it hurt so much more to leave if you let yourself care too much."
xoxo
Posted by Steven's Cybrary at 9:00 AM