Web of Lies by Jennifer Estep

Curiosity is definitely going to get me dead one of these days. Probably real soon.


You might know me as the Spider, the most feared assassin in the South. I’m retired now, but trouble still has a way of finding me. Like the other day when two punks tried to rob my popular barbecue joint, the Pork Pit. Then there was the barrage of gunfire on the restaurant. Only, for once, those kill shots weren’t aimed at me. They were meant for Violet Fox. Ever since I agreed to help Violet and her grandfather protect their property from an evil coalmining tycoon, I’m beginning to wonder if I’m really retired. So is Detective Donovan Caine. The only honest cop in Ashland is having a real hard time reconciling his attraction to me with his Boy Scout mentality. And I can barely keep my hands off his sexy body. What can I say? I’m a Stone elemental with a little Ice magic thrown in, but my heart isn’t made of solid rock. Luckily, Gin Blanco always gets her man . . . dead or alive. 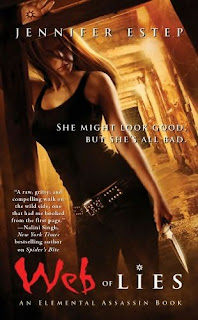 So this was the continuation in the Elemental Assasin's series. Something about this book just appears to read faster than its previous story, Spider's Bite. It even seemed as if it was written different as well. You can tell this in just the first two pages alone.

It took a chapter or so in Spider's Bite before the action began. In Web of Lies, it is instant! The great thing about Web of Lies is how Jennifer does a further story of characters touched upon in Spider's Bite, in addition to adding some new ones.

In Spider's Web I had remarked about how the culinary aspect was ..off? I feel as though I should say so in Web of Lies too. However something is different about it and it didn't seem to phase me as much this time around. Well, except for the fact this is the first novel I've read that makes my stomach growl and intrigues me at the same time.

Originally I had taken note of Roslyn, from Spider's Bite, not being featured. Just as I took note- two pages later there she is! Although she had a smaller stint in this story I was still happy to see her appear being the vampire addict that I am. I really enjoyed both the second interactions Gin (Spider) had with Jake & Macalister & Owen Grayson. I have to say I was a bit disheartened with Donovan's ending in the story. I hope he makes an appearance in Venom the third installment in the Elemental Assasins series.Speaking of Venom, I can't wait for it to come out. The excitement of Mab Monroe's possible take down by Gin's revenge is just swwwwwwwwwwwweet!

Overall I really enjoyed this novel much more than I did Spider's Bite, actually. The great thing of this series is how Estep generously recaps the previous novel. With her doing this it makes it possible to read the novels in either order. Thanks again to Jennifer for sending me both Spider's Bite & Web of Lies. This is a new and wonderful series I hope continues at a lengthy pace.

Don't forget to become a "Follower" on this blog to enter yourself into the July contest to win an autographed Jennifer Estep bookmark of your choice. I will be posting the winner August 2 along with an exciting interview with Jennifer!!!
xoxo