Shadow of the Moon by Rachel Hawthorne

I can feel every Shifter's emotions except Daniel's- the only one whose heart I long to know.

HAYDEN was born a werewolf, a Dark Guardian. But her ability to sense the feelings of fellow werewolves has made her life unbearable. She runs away, only to be tracked by charming, mysterious Daniel, a newcomer to the pack and the one Shifter immune to her powers. As she reluctantly follows him home, Hayden finds herself falling dangerously in love...

But even as her feelings for Daniel deepen, Hayden begins to wonder if he is who he claims to be. Where did he come from and why has no one ever seen him transform? When they stumble upon the body of a Shifter still in wolf form, her worries grow. Someone is killing her kind. Is her handsome tracker really a hunter? And is Hayden his prey? 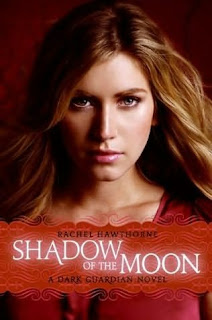 This is another ARC I had requested, unknowingly the fourth in a series. I have yet to read the first three. Upon completing them I realized if the others read like this one, you don't have to read them in order like other saga's.

I have never heard of "harvester's," but it was a welcome surprise in the story. Typically with most werewolves they're always battling the same old vampires. That generic fight I believe is getting to be played out a bit too much. I think, also, that Daniel & Hayden's beautifully, complicated relationship is similar to imprinting (Twilight) but with a different twist to it. In the Dark Guardian's saga the couples don't find their mates until their first "shifting." Even then, the couples have the option to accept or deny the mates request to be paired.

Chapter seventeen was unexpected but predicted it was a ruse for the plot of the story. One complaint I had reading this was of the Dark Guardians themselves. It was never explained what they were guardians of or for. Another problem for me was that I would have liked to have read more on the werewolves, considering it is a series revolving around them. I would honestly like to have read about the characters Rafe, Connor, Brittany, Lindsey & Kayla. Something tells me tho that the previous books were featuring them.  This was a quick and thrilling read. I would definitely read the prior and hopefully latter books in this series if it continues.

"I thought if you came to know me, to see what we had in common, that what was different about us wouldn't matter."
Posted by Steven's Cybrary at 9:00 AM