In the underground of contemporary Eastern Europe lies a treacherous world contaminated by more than Chernobyl radiation and industrial waste, As communism collapsed, the foothold of social order tolerated a lurking subculture of child pornography and human trafficking, Traffyck, as they say.

A former runaway and Kiev nightclub stripper, Mariya Nemeth pulls herself from the dredges of wretchedness to attend school and marries a man she believes has abandoned his shady past. But Mariya learns her husband's past is still his present. He is murdered, a consequence of sex trade operations.

When she convinces Kiev private investigator Janos Nagy to take the case, Mariya discovers the real passion of her life, a lover immersed in the romance of Gypsy culture. Meanwhile, a world away in Chicago, Lazlo Horvath, having solved the Chernobyl Murders decades earlier, senses trouble brewing for his protege and is drawn back to his homeland.

From Chicago's Humboldt Park to the Romanian Carpathian Mountains to the bleak abandonment of Ukraine, a frightening chain of events threatens countless lives when perversion, unacceptable to civilized society, is revealed.

Savvy, outraged, and linked by ancestry, Mariya, Janos, and Lazlo pierce the underbelly of Ukraine's sex trade where power is more important than human lives. 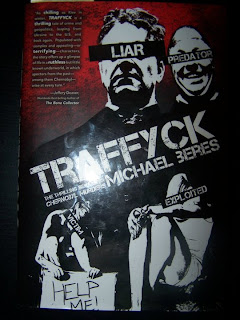 Thanks again goes to both Michael for sending me Chernobyl Murders, Traffyck and allowing me to interview him; and to the amazing people at Medallion Press (publisher) in allowing me to do this review.

This was the sequel to my previous review posting of Chernobyl Murders. However, I must first say, I think the Gypsy tricked me. This is supposed to be a sequel to Chernobyl Murders, but in actuality the "sequel aspect" is very minimal. It is titled as a Lazlo Horvath mystery, Chernobyl Murders. Yet Lazlo is not even a main character, at least not until the last 40 some pages. The novel has the intensity of Chernobyl, but not it's appeal.

In addition to my feelings on Lazlo, I had a few other hesitations in reading this story. I was confused at why a private investigator wouldn't report murders. It wasn't explained, and you think it would have been. I also think that there was just way too many characters in this novel to make a condusive and flowing story. The story just became too jumbled with too many people and too many things going on to really allow a reader to get a grasp on what the story really is focusing on. I think that there should have been a glossary of terminology (so should have Chernobyl Murders) to allow a reader to know what various foreign words meant. For me, I don't like to take time away from the novel I am reading to do research into what the story is talking about. It takes away from the story.

Overall this book wasn't for me. I really wished it could have been as much as I enjoyed the first! However I did take away knowledge and appreciate the effort that Michael has put into this novel. So many people take books for granted anymore and I believe authors such as Michael, should be praised for the time and effort they put into creating a novel for us readers- even if we don't like the outcome of the finished product.

"Love is a double-edged sword."
Posted by Steven's Cybrary at 7:50 AM