Psychologist Morgan Cabot commands a special military support team that provides a unique service. While they are highly trained for military combat, their special abilities don't require training- they are gifts. Dr. Cabot and her teammates, Taylor Lee and Jazie Craig, are "highly intuitive": they hear, feel, and see things that others can't.  They are the Special Abilities Team, and they function outside of normal protocol- and the American public can never know their existence.

The Secretary of Defense of the United States has called upon Cabot's team to stop Thomas Kunz, a sadistic terrorist who specializes in black market arms sales and intelligence brokering.

Kunz's brand of terrorism threatens the United States on multiple levels- his funding is infinite and his reach is global. His modus operandi, using doubles to infiltrate and gather classified information, puts him in a unique position to make the fears of every American citizen a reality.

Colonel Jackson Stern and his brother, Bruce, a biological warfare expert, have become Kunz's latest targets. When Bruce's wife is found stabbed to death, Jackson dedicates himself to a quest for the truth.

Will Morgan's team help Jackson uncover Kunz's secret plans before it is too late? Or will the most secretive terrorist organization in the world transform America into a terrifying and deadly Kill Zone? 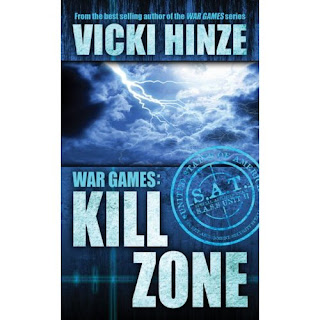 This was a gift from Vicki that she sent along with an ARC of one of my previous reviews for her. I am not a war fan, or even a war fiction reader. However I want to thank Vicki for sending and autographing this novel. I am definitely not ungrateful for the gift. We all know how much I love to read! With that being said...

This is yet another Medallion Press novels I was happy to read for both the author and the company itself. The prologue was a bit overwhelming for me since I'm not into war. If you like terrorism, body doubles, psychological thrillers, espionage, etc, than you will enjoy this novel. I think it was a borderline novel, in my opinion, it wasn't disappointing but at the same time it wasn't that intense. (Maybe this is a biased decision on my part?)

There was a predictability factor with Laura's character which I knew from her first appearance. Chapter ten had me a bit confused. With all of the preventative security measures used throughout the novel, and Morgan's car being infested with bombs...why would Jackson and/or Morgan not think to search the rental car? Especially considering that they went off base to a non-secure location, and that they're highly trained special-op's? That just didn't make sense to me.

Taylor Lee was definitely my favorite character throughout the whole novel. She was adventurous, balls-y, and just a fun person to read about. I actually wished that Taylor was Morgan's character. Morgan was simply too blah for my tastes. The ending did leave an opening for the series to continue. Overall this book wasn't for me. Although as I stated above, if you're into war novels, this could be right up your "zone" (Pun fully intended.)
xoxo
Posted by Steven's Cybrary at 9:00 AM