In 1838, soldiers came with bayonets to drive the Cherokees from their home in the Great Smoky Mountains. But not before the people managed to hide their gold mines. They kept their secret as they were driven like animals to the Oklahoma reservation. Many died on that infamous Trail of Tears, and their secrets died with them.

Now more than a century and a half later, solitary prospector Moses Kyle discovers one of the ancient lost mines. And disappears.

Among those seeking moses and his discovery are hot-shot pilot John Hardin and beautiful Cherokee biker Kitty Birdsong. Unfortunately also on the hunt in the misty folds of the Smokies is a murderous family clan rooted in the worst kind of evil, along with a group of cult members who are led by a fanatical snake-handling preacher, and who will do anything he asks of them.

When naked greed erupts into violence, John and Kitty find they must fight for their lives. 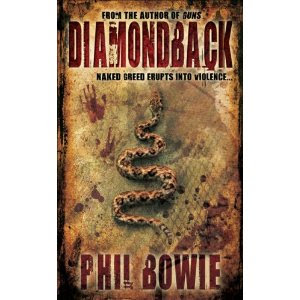 I want to thank Phil Bowie again for his generosity in sending me the John Hardin trilogy and the past interview. I was eager to continue John's story after finishing Guns. Guns was a jam-packed, suspense novel that even tho the story sounded amazing, I was hesitant to read due to my typical genre addiction- horror. I was pleasantly surprised that I was so intrigued by it and thankful Phil had sent me all three novels to do reviews on. Diamondback picks up where Guns left off.

I was happy to see that the Gaskills characters from Guns returned in this sequel. Moses Kyle, a new character, was a welcome addition. Like the Gaskills in Guns, Kyle was John's new "job" for lack of better words. When Moses disappears it is up to John to find out where he is and what happened to him. During Guns, you get a helicopter tutorial. In Diamondback you get a motorcycle one. It is evident that Mr. Bowie writes not only about fiction, but also of his own personal hobbies that he manages to incorporate in his stories without forsaking the heart of a novel.

While I did enjoy Diamondback, I feel that Guns was a better read and more suspenseful. Also, the beginning of chapter twenty-five felt like it was pulled directly from Guns and placed in Diamondback. The last bit of chapters were more intense than the majority of the novel, but they did end quite well. This leaves a great opening for the third installment, KLLRS.

Some quotes I found inspiring:
"We can only touch a rainbow with our minds."

"Got emotionally banged up in a long-term relationship, so I'm gun-shy."

"We live in a continuous miracle. Why do we forget that?"

Thanks again to Phil Bowie and all of the people at his publisher, Medallion Press. Both authors, and publishers alike strive to release so many amazing novels for people like us.
xoxo
Posted by Steven's Cybrary at 9:00 AM