Frank Winter has a gift. He can soothe and handle damn near anything on four legs. But his future career as a racetrack equine veterinarian is destroyed with one vicious kick to the head. Now, the men who financed his education want their investment back and Frank becomes the guy who has to get his hands dirty when a horse is worth more dead than alive.
But when a job goes bad and a horse dies on national television, Frank is taken to a rundown roadside zoo where the animals aren't just hungry. They're slowly starving. And Frank is on the menu.
After finding refuge in an isolated small town ruled with near absolute power by Horace Sturm, Frank sees a chance to make some quick cash. Sturm's got his own problems, though. There's a tumor in his head the size of a golf ball and his thirteen-year-old son has brought nothing but shame and embarassment to the family name.
Under a brutal summer sun, Frank organizes a series of exotic animal hunts through the ranches and backyards of Whitewood, hoping to end the animals' starvation quickly and painlessly. But he seriously underestimates the madness lurking under the surface of the desperate town. Nor does he truly understand the depth of hatred in the decades-old feud between Sturm and the Glouck family. And he definitely doesn't anticipate falling for nineteen-year-old Annie Glouck.
While Whitewood crumbles into a ghost town full of bones, blood, and gunpowder, vicious predators and hunters with itchy trigger fingers stalk the empty streets. It's survival of the fittest as the hunts escalate into death matches between exotic animals and Frank must decide where he stands on the fine line between predator and prey. 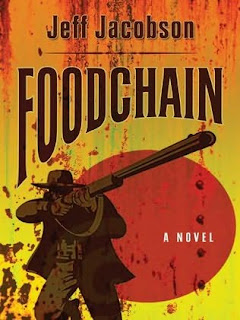 This was a very gory-graphically detailed novel with an A rating and a B rated sense of morbid-disturbing humor. If you're offended by homosexuals, bestiality, brutality, vulgarity and bloodfests, it's safe to say this book isn't for you. PETA would have a frenzy over this book. It is classified as the mystery genre. However, I think it was mistitled. Although I can't think of any title it would fit into properly since it has so many variables it deserves its own category.

When I first heard of the novel I was under a misperception that the animals were some sort of re-animated corpses. Upon viewing the cover art I was even more confused until I finished the book. The John Wayne western cover-art just seemed out of place at first. After further reading I had a more appreciative outlook on it.

There were a few things I had problems with as I read Jeff's novel. Firstly the people aafter Frank was like a brief glimpse. They were built up so much only to never be heard from again. In all of the mayhem in this story it would have been a cool twist to add a bit of feasible drama into the mix. Secondly I think there were some parts that were over-indulgent, but it is fiction. So I guess that is more of a matter of opinion than a reader's problem? Aside from being in the animal field, the fantasy of the story was fun. I'm just thankful this wasn't based on actual events. LOL! Another issue I had was with Annie & Frank's relationship. It was too confusing without remotely making sense. He wants her. He doesn't. He wants to have sex. He doesn't. Bi-polar much? Something more substantial would have been better I think. Like a confirmation of what way the relationship was going. (I can't spoil too much of the details without giving away the story.)

The ending was filled with murderous rage and revenge. Yet still there was nothing with the people after Frank featured in the beginning of the story. Overall I really did enjoy the novel. Jeff is a promising author. I hope to see more from him in the future. It was a great honor to be able to do this review for Jeff. Stay tuned for his interview.
xoxo
Posted by Steven's Cybrary at 11:08 PM