My Soul To Keep by Melanie Wells

As nasty as I knew Peter Terry to be, I never expected him to start kidnapping kids. Much less a sweet, funny little boy with nothing to protect him but a few knock-kneed women, two rabbits, and a staple gun...

It's psychology professor Dylan Foster's favorite day of the academic year- graduation day. And her little friend Christine Zocci's sixth birthday. But the joyful summer afternoon goes south when a little boy is snatched from a neighborhood park, setting off a chain of events that seem to lead nowhere. The police are baffled, but Christine's eerie connection with the kidnapped child sends Dylan on a chilling investigation of her own. Is the pasty, elusive stranger Peter Terry to blame? Exploding light bulbs, the deadly buzz of a Texas rattlesnake, and the vivid, disturbing dreams of a little girl are just pieces in a long trail of tantalizing clues leading Dylan in her dogged search for the truth. 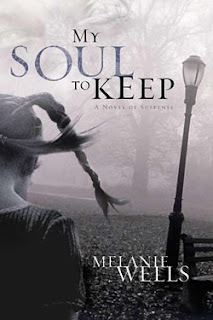 This is the third book in a trilogy by Melanie Wells that I had requested in order of doing a review for. Unfortunately the publisher didn't care to respond to my inquiries not even a "sorry we don't do this." With that being said, I think I would have been able to enjoy this novel much more had I been able to review the first two in sequential order.

The opening of this story had a bright sense of humor that was only erupted by a lightning fast kidnapping and the beginning of a sad journey of characters. As I said above, this is definitely not one of them stand alone novels. I think to fully appreciate it you would have to start at the beginning. If you do, you would probably be able to understand more on Peter Terry. Is he a ghost? Demon? Figment of Dylan's imagination? Was he real- died and is now some kind of recurring stress factor????

Aside from the hippy humor, I realized quite quickly, throughout this novel, why it is that I am so obsessed with horror novels. The thought process is this: Other types of fiction can be so closely written to reality as is this story. It makes one fearful of what can actually and what does actually happen in the real world. In horror you have that safety in knowing that as morbid and graphic as the story is you know that in all of it's glory that it is PURELY fictional. Although this story does bring out a good topic that so many people religious or otherwise like to gnaw on. Do children have the capability of seeing things adults can not? Such as evil, good, angels and demons- literal or figuratively? I feel in my own beliefs there is no doubt that they do! Children just have this innate sense of knowing things that we as adults just can't grasp.

I felt the ending was one that can just take your breath away. For me as the book was drawing to a close, I felt as that moment when you lose your breath for so long, and then it suddenly comes rushing back at you with an overwhelming force. I really like this story. I only wished I had read books one and two first. I will without a doubt do that, hopefully soon!

Thank you again to Melanie for her kindness in allowing me to do this review for her.

Favorite quotes:
"Answering machines are secretly programmed to accept only messages from people you don't want to hear from."

"Love the hair. Hope you win!"

"My soul could use a can of Comet and some elbow grease."
xoxo
Posted by Steven's Cybrary at 8:29 AM