TEXAS? TOAST.
Battered by five cataclysmic hurricanes in three weeks, the Texas Gulf Coast and half the Lone Star State is reeling from the worst devastation in history. Thousands are dead or dying-but the worst is only beginning. Amid the wreckage, something unimaginable is happening: a deadly virus has broken out, returning the dead to life-with an insatiable hunger for human flesh...

THE NIGHTMARE BEGINS
Within hours, the plague has spread all over Texas. San Antonio police officer Eddie Hudson finds his city overrun by a voracious army of the living dead. Along with a small group of survivors, Eddie must fight off the savage horde in a race to save his family...

HELL ON EARTH
There's no place to run. No place to hide. The zombie horde is growing as the virus runs rampant. Eddie knows he has to find a way to destroy these walking horrors...but he doesn't know the price he will have to pay... 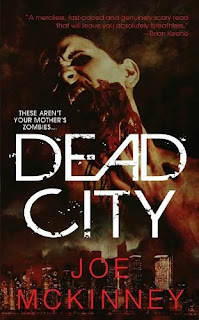 This is a novel I had contacted Joe in order of doing a review. He not only sent me Dead City, but also Dead Set (a zombie anthology), a bookplate for both Dead City & Apocalypse of the Dead (Dead City sequel due out later this year). I will also be posting our interview with Joe when I begin resuming my author interviews in a few months.

This is also my first zombie review! Without a doubt this story has one intense action introduction. It was a page turner that I just didn't want to put down. The great thing about this novel- is the fact Joe weaves in all of the major contents of what a novel truly needs to make it pop! Comedy, sadness, drama, horror, action. There was not one slow point in the entire book. I was on the edge of my seat in suspenseful horror.

I can't wait for Apocalypse of the Dead to come out. I typically am not that big of a fan of zombies, but I think Joe has twisted my arm. Thanks again to Joe for allowing me this opportunity. Stay tuned next week for the Dead Set review, and details on a Joe McKinney contest for the month of August!
xoxo
Posted by Steven's Cybrary at 9:02 AM